Has anyone ever gifted you with something from a garage sale because that something was "so cute they couldn't pass it by," but then they needed to declutter? This happens to us a lot. Sometimes it is a something I can use like children's clothing. Very often it is old rosaries, holy cards and other sacred objects that are complicated to get rid of. Once it was a rather large, semi-broken organ (about 5 feet by 5 feet by 6 feet).
Last summer, a friend gave me stacks of wonderful fabric to use with our crisis pregnancy crafting club. But she also gave me seven days of the week dish clothes. They are very cute with little kitten doing various domestic duties. They are also full of holes and very thin. What to do with them? Daughter #2 is a cat-lover; she wouldn't let me 'goodwill' them. I decided to make them a part of the family 'control journal.' 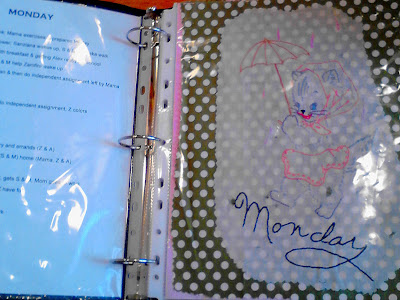 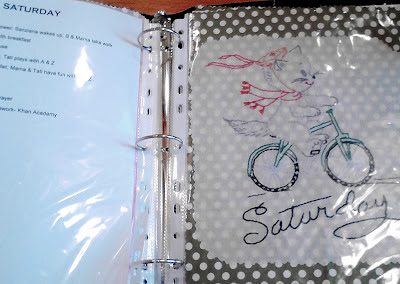 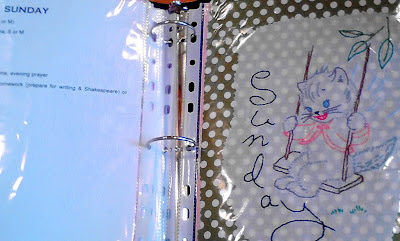 Be faithful in small things because it is in them that your strength lies. ---  Blessed Mother Teresa

Regarding the debate about faith and works: It's like asking which blade in a pair of scissors is most important --- C.S. Lewis

It is not only possible to say a great deal in praise of play; it is really possible to say the highest things in praise of it. It might reasonably be maintained that the true object of all human life is play. Earth is a task garden; heaven is a playground. To be at last in such secure innocence that one can juggle with the universe and the stars, to be so good that one can treat everything as a joke — that may be, perhaps, the real end and final holiday of human souls. ---  GK Chesterton 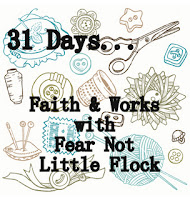