I wouldn't call myself a feminist. I made eggs for my husband this morning and packed his lunch. I'll take care of the kids all day. I have a large stash of fabric that I am looking forward to using- mostly for my tiered ruffled skirts for various girls in my life. I actually thought that the list of Rapunzel's daily activities in Tangled sounded lovely- if not for the kidnapping and slavery and abuse aspects of the film. My rite has no women around the altar, and I'm okay with that. I actually think it is a good idea that Jesus calls men only to His priesthood, being that all His apostles were men. But there is some Mary and Magdalena in me along with the Martha. I vote. I drive. I work part time while my husband takes care of his children. And right now, yes, I am even wearing pants.
I tried to buy my daughters some new clothes this past weekend. I started at Target because they have carts to keep the littles wrangled. My 11 and 12 year olds don't really fit in the girls' clothes, so we went to the Junior's section. Nope. Nada. I bought a few t-shirts, but there was really nothing for them. After seeing the quality of the polo shirts, I decided to spend a bit more on-line with Land's End and LL Bean. The mall was much worse. Why, oh why, do mothers purchase pants with 'Juicy' on the backside? Why would a focus group think that this shirt is something that girls should aspire to? 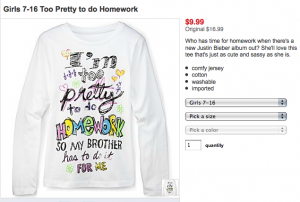 The shirt says "I'm too pretty to do homework, so my brother has to do it for me." Who has time for homework when there's a new Justin Beiber album out? So this is when my feminist-self starts to get stronger. This t-shirt was developed because lots of people in the design pipeline knew that it would sell. Nothing is done in marketing without a lot of research, focus groups and talking with design teams up and down the corporate ladder.
In my little bubble, every one would be disgusted by this sentiment.  We want our girls to be intelligent and educated while being kind, feminine and as beautiful as God made them to be. I feel like my girls, in my attempt to be balanced, are between the 'quiverful' world of waist-long hair and ankle-length skirts and the 'normal' world of six year old girls with 'Juicy' on their behinds and Glee notebooks for school. What they'll put in their notebooks, I'm not sure. They're too pretty for homework.

Of course, women around the world (basically if they are not from North America or Western Europe) are literally under siege. I am grateful that my three daughters are living in a place where they were allowed to be born. But I still feel like t-shirts like the one pictured above is an example of hatred towards the female gender. Perhaps it is even self-hatred to form girls into thinking that their looks are all that matters. And according to the world of MTV (no music, just 'Jersy Shore' with girls that fall over drunk every episode and -I suppose- sleep with random men) and Huffington Post (not a lot of political commentary these days, just reality 'celebrity' gossip), a girl doesn't need to study. All she needs for worldly success is a sex tape (Paris Hilton, Kim Kardashian, almost every pop stars' videos). Even the daughter of Laurence Fishburne (rent his version of Othello; it will break your heart) has turned to such immoral activities as porn to be a 'successful' actress. And this is what the suffragettes suffered for? So while a t-sirt is not as serious as the 200 million missing girls due to gendercide, it is a symptom of a world-wide hatred and disrespect for girls and women. As always, we must start with ourselves and respect ourselves. Then, we can work on gaining the respect of others.
shared by priest's wife - S.T./ Anne Boyd at 3:00 AM