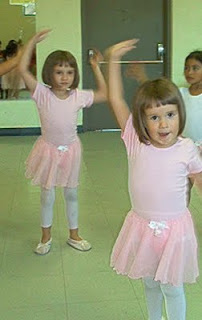 So- it was a rather busy & serious weekend. The busy part? The girls had their Nutcracker audition. Oh, for the simplicity of 'do the pony' and 'do the duck' in pre-ballet at the YMCA. Now, we do ballet three times a week (almost six hours of instruction), not including our Saturdays which will be decimated until Nutcracker is finished. Not that I am complaining. It is hard for my girls to be passed over (they are 'pre-pointe' while most girls at the school are en pointe at their age). Secret Vatican Spy- ballerina extraordinaire- what am I doing wrong? Should I watch Dance Moms for pointers? just kidding. I think.

Sunday afternoon after church and church and more church, my daughters sang two songs at the hospital memorial service for 9/11 first responders. If I do say so myself, they did well under the pressure while singing in front of two chiefs of police, a fire battalion chief, various armed service members and some parishioners who joined us. Their version of the national anthem was well-received. As good Byzantine Catholics, they faced what they were singing to, the flag (ad orientem joke- haha?). To make it a true family affair, I was going to sing as well, but the baby has been quite under the weather, and she wouldn't stop clinging to me. So the final song went to priest-husband who was leading the memorial.

Being unemployed this semester, I am looking for lots of ways to save money anywhere I can  So, I saved 30 cents a can by buying plum tomatoes instead of the cheapest marinara at Trader Joe's. I was prepared to puree them with my new birthday immersion blender (thanks F! I have been making morning smoothies with it- a Vita-mix is not in my future any time soon) and make my famous spaghetti with hamburger meat, onions, mushrooms and black olives. I cooked the meat and onions in one pot so I could skim off the fat (I'm no Pioneer Woman), and I started sauteing my mushrooms in another. I always drain my can of olives and put them in with the mushrooms right away so I have a place to put the drained hamburger fat and so I won't eat all the olives before dinner! I put my whole tomatoes in with the mushrooms and started using the immersion blender. Whoops. My sauce was sort of a strange color with pureed mushrooms and black olives. Better sauce next time!

A theological thought: please get educated about the Catholic faith before you say something silly under the guise of knowing what the Church teaches. This weekend, I fast-forwarded (Hulu) through the film Saint of 9/11, a documentary about the life and death of Fr. M Judge. A policeman was giving his testimony about the day. He had rushed to a Catholic church, looking for a priest to administer the last rites to a dying person. No priest was to be found, but the church secretary told him, "In an emergency, anyone can administer last rites." The policeman was amazed to be "promoted" like that. Um, sorry. Baptism is the only sacrament that anyone can administer in an emergency. Whether God would allow someone to damn himself to hell because a priest couldn't be found for confession and last rites is another issue altogether. I believe that, through God's infinite mercy and our efficacious prayers, that man and the 'Falling Man' and many others are in the comfort of God's presence. Even before I became Catholic, I thought the concept of Purgatory ('Heaven's waiting room') was logical; I have never thought much of 'limbo,' though. So if a priest says to you, "stop praying for the deceased during the rosary, he is already in heaven as a saint," just smile a bit and go on with the intentions. And save a few prayers for the soul of that priest who does not seem to understand that all have sinned and need the help of our prayers. God is just and merciful; we shouldn't err on either side. Trust in God's mercy and love. Pray for His mercy to overcome His wrath and justice.
shared by priest's wife - S.T./ Anne Boyd at 10:39 PM