Joe is "just another sinner along the way here." 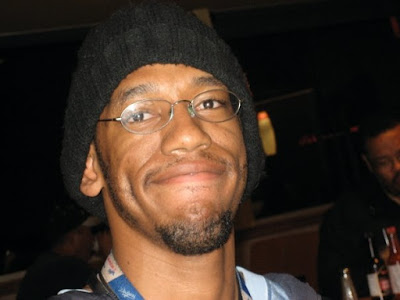 How long have you been a practicing Catholic?

Well, I was baptized into the faith a day after I was born. So I guess that’d make me quite literally a Catholic from just after birth. I have been going to church since I was little, and while some days were easier than others.

Care to share your conversion/reversion story? (More like how a born Westerner found his inner Eastern which he always had)

I suppose the story begins something like this, I was baptized a Roman Christian the day after I was born. And I grew up going to Mass every Sunday, sometimes me willing, sometimes me, not so much….One of my favorite memories was midnight Mass…but more on this later.

Fast forwarding to my teenage years where I experienced the hardest thing that any person will have to go through, the loss of a parent. (My mom) it probably didn’t help that things were already in a funk, when I lost both my grandmother and my aunt in recent years before that. During that time, I felt that the world around me was falling apart, and things changed to where I don’t want to say I didn’t believe, but I had very heavy doubts.

After mum died there was some time that I didn’t go to church or have anything to do with church at all. It was during college when a 7th day Adventist challenged me, that I started researching the Faith. I really fell in love with the Eastern Fathers, St John Chrysostom , St Basil, St Simeon the new Theologian, I did nothing about this of course being I just wanted to get back on my feet and being able to answer the questions that the girl brought up. Around the beginning of Pope Benedict’s Pontificate I started heading back to Mass….However that spark for the East didn’t reappear for a while until a few years into college.

I finally had the change to go experience and visit different places. Now having a car, I searched for various churches to go to, I wondered what in the world was this Byzantine Catholic Church that I read about. I went on a Sunday for a Liturgy in 2007 and the rest was history. I wondered where in the world was this, the reverence the movement, the other-worldliness of the Liturgy that I never experienced as a child, and even as an adult with the Traditional Latin Mass. I’m a physicist and mathematician by training, so my approaches to things are quite linear and very much cerebral. At the Divine Liturgy, there was motion, and I could let go of the normal routine of things to see things in a very different light….

A few years later, I found myself in Roman Seminary, and I make no secret about the fact that I wished to serve both the West and the East at the time. But also during this time, there was an opportunity to experience the Divine Liturgy according to the Armenians, but there was some similarity to the Latin praxis and still wasn’t there. I’ll spare you the details of how my time in Roman Seminary was, I’ll just say it was “interesting”. Finally, I moved to Idaho, and found what I’ve been searching for. The Divine Liturgy, with all of the motion, and it was from that point I took this Eastern praxis as my own, and something I started incorporating into my thoughts and praxis. It was the interaction with a few of the parishioners at the parish that really helped bring out my Eastern thought. I’ve always been all right with diversity in opinion and thought, and never thought that we’re trying to train robots, or everything must be a carbon copy. Seeing this lived out in Eastern Christianity made me want more of this, and so I made this happen.

Also during this time I experienced the Faith at a Russian Orthodox Church during Lent. I had the chance to attend the Good Friday Liturgy and saw a very old man about 95 making full prostrations during the Liturgy. (Which for me is difficult at times), but that day I tried much more….I had been a rusophile for a long time, since high school, and to experience the Faith from the Russian perspetrivu brought a completion to what I try to live.

I guess you can say this is the summarised form of what could be written as a much more detailed version. I’m thankful for the opportunity to share this part of my story with you.

How does your faith inform your day-to-day life?

Everyday starts and ends the same, with the Jesus prayer in Russian (my preferred language to pray in these days)….Though I’m known to still occasionally throw out some words in a few other languages from time to time.

The Faith influences everything that I do, I don’t claim to be any good at this though I’m still trying to get this right, 32 years and I’m still not quite getting it :p….I try to keep things simple, Love God, love neighbour, don’t be a jerk…I try to live all these things out, but of course this is still a work in progress.

There’s a lot of play when it comes to the issues of the day; I’m glad that the Faith doesn’t make us approach things from the same way. We can look at different issues from different perspectives. I’m constantly making the sign of the cross, and invoking Our Lord’s mercy, because do we all need it collectively and individually or what? .

As far as me going further and getting ordained…only if God smacks me upside the head with a 2 x 4. My fianceé probably wouldn’t want such a life :p.

What is your greatest challenge in practicing your faith?

Also quite a big challenge from time to time is of course all of the past that I’ve been through, it’s sometimes tempting to give up, but thou shall persevere until the end right :p…So we keep going.

“Let God arise, and let his enemies be scattered, and let those who hate Him, flee from before His Face” (Ps 68, 2)

This is the opening verse from the 3rd antiphon at Easter, my favorite Liturgical celebration of the year, it really summaries my thoughts on pretty much almost everything and summarizes what we believe.

“To have faith in Christ means more than simply despising the delights of this life. It means we should bear all our daily trials that may bring us sorrow, distress, or unhappiness, and bear them patiently for as long as God wishes and until He comes to visit us. For it is said, ‘I waited on the Lord and He came to me.'” --- St Simenon the new Theologian, (of course this is all easier said than done ;)