How long have you been a practicing Catholic? All my life, I am a cradle Catholic.  My mom consecrated me to the Virgin Mary when I was an infant.  I am therefore as a special child of Our Lady and I am grateful to my mom for doing that for me. 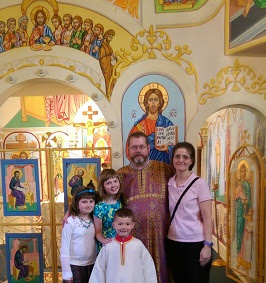 Care to share your conversion/reversion story?  Well, the only conversion of sort I ever had was from Roman Catholicism to Byzantine Catholicism.  In 1983, as a ninth grader, I read William Shakespeare’s play Julius Caesar and I wanted to learn about the Roman Empire.  I was surprised to discover there was an Eastern Empire that survived the collapse of the Western Empire.  In studying that Eastern Empire I discovered eastern Christianity and John Chrysostom, who became my confirmation saint. Of course, not all of it was spiritual.  I was quite fascinated by Basil the II the Bulgar Slayer and Justinian the Great.
I told my mom I wanted to switch to the Byzantine Catholic Church, but she told me I could not until I was an adult.  That was back in 1984.  Thirty-two years later, my wife and I, along with our three children transferred to the Ukrainian Greek Catholic Church.

However, since I am deeply rooted in Patristics and the history of the Roman Empire, it is not as big a jump as one might think.  Furthermore, the old Latin mass has more in common with the Byzantine Rite than one would think.  In fact, history shows that there is nothing more silly than a Roman Catholic traditionalist or an Orthodox person saying there liturgy has not changed since Gregory the Great or John Chrysostom.  Even the vestments of the priest in the divine liturgy where once more like the gothic chasubles found in the Roman Rite.   The Roman vestments, especially those of the 1950s and 1960s exclusive of lace albs, are actually more like what was used in the East through the tenth century. In the divine liturgy, we use the gates and curtains – in Churches in the West, the use of an image screen/rood crossing and curtains lasted up until the Council of Trent, after which they were removed in response to the reformation. 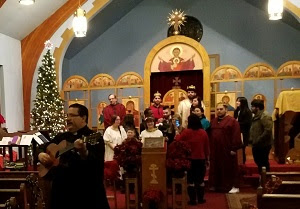 How does your faith inform your day-to-day life? By following the liturgical calendar, I am able to adopt my prayer life to the daily menaion.  In practice the effort is to Love one another as I have loved you.  So, I am working on avoiding negativity, judgmentalism and self-righteousness.  People need prayers and a good positive word.  So, I pray for everybody.  The key is to pray and forgive your enemies and not be jealous or envious of their success.  That way you untie the spiritual knots you would otherwise tie yourself up in with thoughts of revenge, retaliation, etc.  Nothing works better than prayer.  Pray, pray, pray!  I would add in that I love Akathists.  The latest I have discovered is Dr. Alex Romans’s Akathist to Our Lady of Guadalupe.  It is beautiful.

What is your greatest challenge in practicing your faith? Not being a self-righteous pompous ass.  Committing sin.

Favorite Spiritual writing (besides Bible) quotation? “Little Children, love one another.”  St. John as quoted at 6:10 in Book Three of St. Jerome’s Commentary on Galatians.  Outside of that I love the Akathists found in the Byzantine Prayer Book put out by the Melkite hierarchy.

Favorite saint and why? I have many saints as friends whom I look forward to conversing with in Heaven – Thomas Aquinas, Augustine, John Chrysostom, Demetrius of Rostov, Edmund Campion, Theresa of Liseux, Teresa of Avila, Maximus the Confessor, Patrick, Germanus of Constantinople, Martin of Tours, Gregory Palamas etc.  My favorite personage is Origen – no one ever wrote as beautifully on scripture as he did. And then there are the great love mystics and female thinkers I love– Hadewijch, Mechtilde of Magdeburg, Hidegard of Bingen, Gertrude the Great, Julian of Norwich, etc. 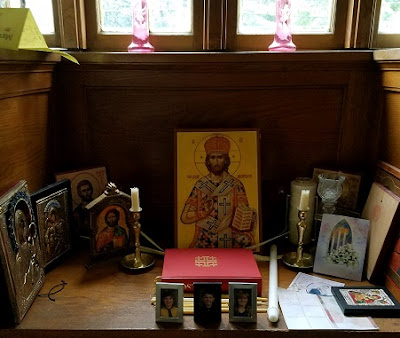 What is your ministry in the church? Acting Subdeacon and reader.  In the domestic church my ministry is to be a good husband and father.

Education and job? BA and MA in History and a JD.  Attorney by profession, historian by training

Hobbies? Gardening, book collecting, coaching soccer.  I have cultivated quite successfully a pawpaw thicket in a colder zone than the tree is used to.  The fruit is tasty.  I have become very good at growing pumpkins, butternut squash, tomatoes, and peppers.

What is 'cool'/interesting about you? Honestly, as I am approaching the age of 50 with three kids I do not care about being cool anymore.  My daughter says I am intelligent and that I ask questions that need to be asked in a diplomatic but incisive manner, but more brusquely when needed.

If you had $20 and an hour of free time what would you do? Go to Church with a prayer book or a book of spiritual reading, light some candles and enjoy being in the presence of Our Lord and Savior Jesus Christ.


Thank you, James, for sharing your story!
Click HERE for more "I'm a Catholic" posts
shared by priest's wife - S.T./ Anne Boyd at 5:00 AM