Celebrating & Strengthening Christian Marriage- start your life together in holiness

Let your prayers be common. Let each go to Church; and let the husband ask his wife at home, and she again ask her husband, the account of the things which were said and read there. If any poverty should overtake you, cite the case of those holy men, Paul and Peter, who were more honored than any kings or rich men; and yet how they spent their lives, in hunger and in thirst. Teach her that there is nothing in life that is to be feared, save only offending against God. If any marry thus, with these views, he will be but little inferior to monks; the married but little below the unmarried. 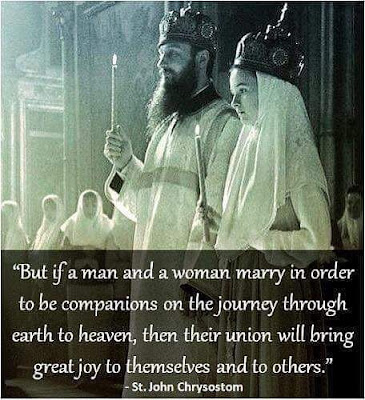 If you have a mind to give dinners, and to make entertainments, let there be nothing immodest, nothing disorderly. If you should find any poor saint able to bless your house, able only just by setting his foot in it to bring in the whole blessing of God, invite him. And shall I say moreover another thing? Let no one of you make it his endeavor to marry a rich woman, but much rather a poor one. When she comes in, she will not bring so great a source of pleasure from her riches, as she will annoyance from her taunts, from her demanding more than she brought, from her insolence, her extravagance, her vexatious language. For she will say perhaps, I have not yet spent anything of yours, I am still wearing my own apparel, bought with what my parents settled upon me. What do you say, O woman? Still wearing your own! And what can be more miserable than this language? Why, you have no longer a body of your own, and have you money of your own?

After marriage you are no longer two, but have become one flesh, and are then your possessions two, and not one? Oh! This love of money! You both have become one man, one living creature; and do you still say my own? Cursed and abominable word that it is, it was brought in by the devil. Things far nearer and dearer to us than these has God made all common to us, and are these then not common? We cannot say, my own light, my own sun, my own water: all our greater blessings are common, and are riches not common? Perish the riches ten thousand times over! Or rather not the riches, but those tempers of mind which know not how to make use of riches, but esteem them above all things.

Teach her these lessons also with the rest, but with much graciousness. For since the recommendation of virtue has in itself much that is stern, and especially to a young and tender damsel, whenever discourses on true wisdom are to be made, contrive that your manner be full of grace and kindness. And above all banish this notion from her soul, of mine and yours. If she say the word mine, say unto her, What things do you call yours? For in truth I know not; I for my part have nothing of my own. How then do you speak of 'mine,' when all things are yours? Freely grant her the word. Do you not perceive that such is our practice with children? When, while we are holding anything, a child snatches it, and wishes again to get hold of some other thing, we allow it, and say, Yes, and this is yours, and that is yours. The same also let us do with a wife; for her temper is more or less like a child's; and if she says mine, say, why, everything is yours, and I am yours. Nor is the expression one of flattery, but of exceeding wisdom. Thus will you be able to abate her wrath, and put an end to her disappointment. For it is flattery when a man does an unworthy act with an evil object: whereas this is the highest philosophy.

'The husband has not power over his own body, but the wife.' 1 Corinthians 7:4 If I have no power over my body, but you have, much more have you over my possessions. By saying these things you will have quieted her, you will have quenched the fire, you will have shamed the devil, you will have made her more your slave than one bought with money, with this language you will have bound her fast. Thus then, by your own language, teach her never to speak of mine and yours. And again, never call her simply by her name, but with terms of endearment, with honor, with much love. Honor her, and she will not need honor from others; she will not want the glory that comes from others, if she enjoys that which comes from you. Prefer her before all, on every account, both for her beauty and her discernment, and praise her. You will thus persuade her to give heed to none that are without, but to scorn all the world except yourself. Teach her the fear of God, and all good things will flow from this as from a fountain, and the house will be full of ten thousand blessings.

If we seek the things that are incorruptible, these corruptible things will follow. For, says He, seek first His kingdom, and all these things shall be added unto you. Matthew 6:33 What sort of persons, think you, must the children of such parents be? What the servants of such masters? What all others who come near them? Will not they too eventually be loaded with blessings out of number? For generally the servants also have their characters formed after their master's, and are fashioned after their humors, love the same objects, which they have been taught to love, speak the same language, and engage with them in the same pursuits. If thus we regulate ourselves, and attentively study the Scriptures, in most things we shall derive instruction from them. And thus shall be able to please God, and to pass through the whole of the present life virtuously, and to attain those blessings which are promised to those that love Him, of which God grant that we may all be counted worthy, through the grace and lovingkindness of our Lord Jesus Christ, with Whom, together with the Holy Ghost, be unto the Father, glory, power, and honor, now, and ever, through all ages. Amen.
shared by priest's wife - S.T./ Anne Boyd at 12:19 PM