I was raised in the Roman Catholic faith.  I attended a Catholic school, and served as an altar boy.  While I was in elementary school, though, I had a transformative experience. My parents took me to a wedding at a Greek Catholic parish, and I was struck by the beauty and sense of sacredness.  Like the envoys sent to Constantinople by St. Vladimir, I didn’t know whether I was in heaven or on earth.  This moment changed the entire trajectory of my life.
As it happened, my next-door neighbor – a boy my age – was Greek Catholic.  I would sometimes attend Divine Liturgy with his family.  The liturgy had such a profound effect on me that I would literally dream about it at night.
When I graduated from college, I joined a Greek Catholic parish and officially transferred to the Byzantine Rite. 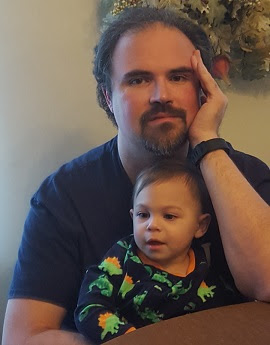 How did your family react to your change of rite?
They were very supportive.  They knew that I wasn’t rejecting the Catholic faith that they instilled in me, but was embracing it in a different form.
I absolutely love Roman Catholicism.  I have so much appreciation for everything that the Latin tradition offers.  I never rejected it.  Rather, I was called to serve God by building up and promoting the “Eastern Lung” of the Catholic Church.  I believe that a strong, vibrant Eastern Christian presence within the Catholic Church will lead to a stronger, healthier Roman Catholicism.
How did you become a theologian?
In college I studied Philosophy and Religion.  I realized that I love teaching people about the Catholic faith, and wanted to pursue a career as a theology professor.   I went on to graduate studies in Theology at Franciscan University.
Upon finishing my master’s degree, I was accepted into the doctorate program in theology at Duquesne University.  While in this program, I had the opportunity to focus my studies on my true passion: Eastern Christianity.  My dissertation director was Father Michael Slusser, a patristics scholar with a profound understanding of the Greek Fathers and the Eastern Christian theological tradition.  I learned so much from working with him on my dissertation, which was a study entitled Adrian Fortescue and the Eastern Christian Churches.  It was later published as a book by Gorgias Press.
I also had the pleasure of taking classes at SS. Cyril and Methodius Byzantine Catholic Seminary.  One of the professors, Father David Petras, had a tremendous impact on me.  Father David served on my dissertation committee, and taught me a great deal about liturgy and ecumenism.  I also became friends with a Ukrainian Catholic priest who served in Ireland, Archimandrite Serge Kelleher of blessed memory.  Father Serge was very wise, and taught me what it really means to be an Eastern Christian in communion with Rome – with the challenges that it entails.
After completing my doctorate, I was blessed with my dream job.  I teach theology at a small Catholic college in central Pennsylvania, Mount Aloysius.  I go to work and teach people about God, and I love every minute of it.
Do you have any hobbies?  What do you do when you’re not teaching theology?
I spend a lot of time with my family, raising two wonderful children.  My wife, Vanessa is a life-long Greek Catholic, and she has a deep love for the faith.  Vanessa’s grandmother was a cantor who spent her life serving the church, and Vanessa seeks to follow her example.
For fun, I enjoy working with computers.  I have several websites that I design and manage.  One of the websites, From East to West, is dedicated to teaching Western Christians about Eastern Catholicism.
My other primary website, Mythic Scribes, is a community of fantasy writers.  I love reading and writing fantasy fiction, and Mythic Scribes is a wonderful place to explore that interest.

Many thanks to Dr. Anthony Dragani for sharing!
for more "I'm a Catholic" profiles click HERE
do you want to share your spiritual journey? Email me at remnantofremnant@blogspot.com!