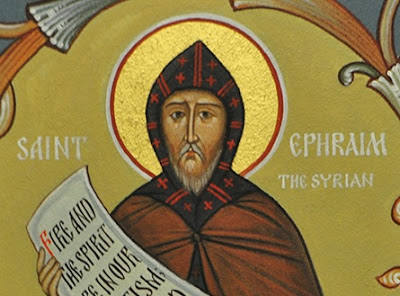 St Ephrem the Syrian was a deacon and a song-writer from the 300s "All kinds of storms trouble me -- and you have been kinder to the Ark: only waves surrounded it, but ramps and weapons and waves surround me... O Helmsman of the Ark, be my pilot on dry land! You gave the Ark rest on the haven of a mountain, give me rest in the haven of my walls."

"Ever forseeing the hour of reckoning thou didst bewail thy sins with tears of compunction O Ephraim and thou wast active in works as a teacher O Saint. Therefore O father of all the world thou didst rouse the indifferent and easy-going to repentance." 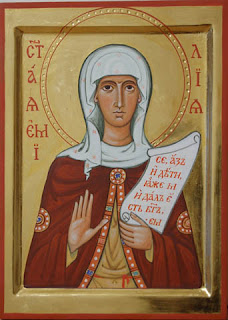 St Amelia  (died May 30, 375)  was the wife of Basil the Elder and bore nine or ten children,including Basil of Caesarea (born circa 330), Macrina the Younger, Peter of Sebaste, Gregory of Nyssa, and Naucratius. She is not the only woman in her family to be venerated as a saint. Both her mother-in-law, Macrina the Elder, as well as her daughters, Macrina the Younger and Theosebia are recognized as saints in the Catholic Church (except for Theosebia) and Eastern Orthodox Church.
"Through thee the divine likeness was securely preserved, O Mother Emilia; for thou didst carry the cross and follow Christ. By example and precept thou didst teach us to ignore the body because it is perishable, and to attend to the concerns of the undying soul. Therefore, doth thy soul rejoice with the angels." 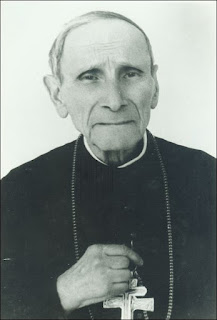 Servant of God Iuliu Hossu (30 January 1885 - 28 May 1970) was a Romanian Greek-Catholic bishop of the Cluj-Gherla Diocese and later an "in pectore" cardinal (never functioning) and victim of the Communist regime.Pope Paul VI elevated Hossu to the rank of cardinal "in pectore" in 1969 but did not publish his appointment until 1973 which was after Hossu's death. The Communist authorities arrested Bishop Hossu on 28 October 1948. From 1950 to 1955 he was detained as political prisoner at the Sighet prison. He spent the rest of his life under house arrest and later died in 1970.

Servant of God Catherine Dougherty  -Ekaterina Fyodorovna Kolyschkine de Hueck Doherty - (August 15, 1896 – December 14, 1985), was a Catholic social worker and founder of the Madonna House Apostolate. A pioneer of social justice and a renowned national speaker, Doherty was also a prolific writer of hundreds of articles, best-selling author of dozens of books, and a dedicated wife and mother. 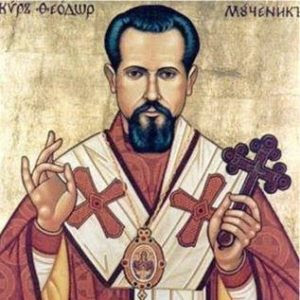 Blessed Theodore Romzha (14 April 1911 – 31 October 1947) was bishop of the Ruthenian Catholic Eparchy of Mukacheve from 1944 to 1947.Theodore Romzha was born in the Subcarpathia region, Hungary, Austria-Hungary (in the Rusyn village Velykyi Bychkiv, now Ukraine) on 14 April 1911.  Assassinated by NKVD, he was beatified as a martyr by Pope John Paul II on 27 June 2001.
"O priest martyr Theodore, following the apostles' path of piety, As a good shepherd guarding Christ's flock, you laid down your life, For having been slain by the godless, o Blessed One, Adorned with wounds you entered into eternal joy, o Long-Suffering One, And received from the Lamb of God the crown of glory. Pray to Him to save our souls." 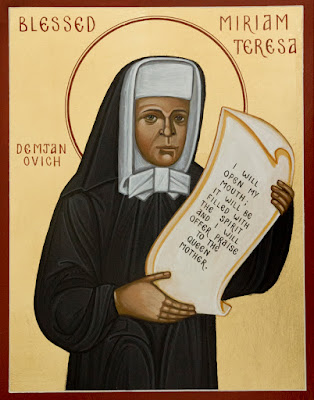 Blessed Miriam Teresa Demjanovich, S.C. (March 26, 1901 – May 8, 1927), was an American Ruthenian Catholic Sister of Charity, who has been beatified by the Catholic Church. The beatification ceremony was the first to take place in the United States. She was born Teresa Demjanovich in Bayonne, New Jersey, on March 26, 1901, the youngest of the seven children of Alexander Demjanovich and Johanna Suchy, Ruthenian immigrants to the United States from what is now eastern Slovakia. She received Baptism, Chrismation, and First Holy Communion in the Ruthenian Rite of her parents. 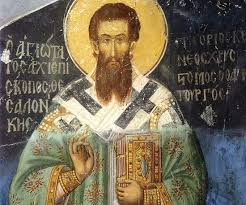 Gregory Palamas (c. 1296 – 1357 or 1359) was a prominent theologian and ecclesiastical figure of the late Byzantine period. A monk of Mount Athos (modern Greece) and later archbishop of Thessaloniki, he is famous for his defense of hesychast spirituality, the uncreated character of the light of the Transfiguration, and the distinction between God's essence and energies (i.e., the divine will, divine grace, etc.).
"O light of Orthodoxy, teacher of the Church, its confirmation, O ideal of monks and invincible champion of theologians, O wonder-working Gregory, glory of Thessalonica and preacher of grace, always intercede before the Lord that our souls may be saved."
shared by priest's wife - S.T./ Anne Boyd at 5:30 AM