"Yes, I am one of those Latin Church Catholics considering the switch to a Byzantine Rite Church.  I understand this changing of ascription might puzzle (at best) or offend (at worst) some.  Let me say that I understand the reservations entirely, and I’d like to bare my soul (if only ever so slightly) to explain why I’ve come to this point and why you might not.

Back in high school, I had the great privilege of attending a Ukrainian Catholic High School.  It was just down the block from our house and had a solid theology program (unlike so many other Catholic high schools at the time).  It was there that I first encountered the Divine Liturgy. 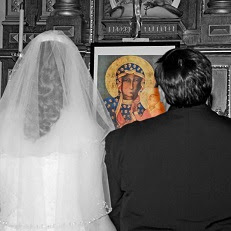 We also wound up becoming part-time parishioners at the school’s parish, at first for the tuition deduction (I mean, we were already Sunday Mass goers, we just split our Sundays between our Ukrainian Catholic and Latin Polish parishes).  My brothers and I also had the privilege of serving at the Divine Liturgy.  As time went on and we transferred out of the school, I still felt the “call of the East” drawing me back.  I’d still attend Divine Liturgy on occasion, but as the rest of my family was more comfortable as Latins, I did so infrequently.
While completing a year of national service at my alma mater after graduation, I was able to start attending a Ruthenian parish somewhat regularly (again, living only 30 minutes or so from home, I’d often go back for Sunday Mass with family).  It was again there that I was even more in love with this venerable tradition.
But then came the years of exile when I took a job for 4 years in rural, southern Illinois (where it was odd enough to be Catholic, much more Byz-curious).  When my wife and I were getting ready for our life of wedded bliss, she got a job offer in northern Michigan.  Real God’s country, but no Byzantine Rite parishes or missions.
And so, after 3 years in northern Michigan, I’m in the process of trying to determine what support there might be for an outreach in this area (with the support of the relevant eparchies).  I know it will be a long process, but definitely worth it.

So, you may ask, what draws me to the East?

Well, I read an article featured on this blog that rightly pointed out the several stereotypical Latins becoming Byzantine.  First, there’s the rabid traditionalist who’s weary of “modern” hymns, versus populum Mass, women on the altar, etc.  I’ve met these people and know some of them.  As the Blogging Presvytera rightly noted, these folks will often go back to a Latin parish once it starts to offer a Tridentine Mass or other traditional-style Latin Rite Mass (since they were drawn to the idea of a non-modern liturgy rather than, specifically, the Divine Liturgy, etc.).  While I’ll admit the tradition of the Ukrainian and Ruthenian Churches (as well as that one heady Sunday morning I spent in a smoke-filled Melkite parish stumbling out with all of the antidoron I could grab) has greatly impressed me, I realized that the Byzantine Rite Churches are not museums.

They are places of worship where our mundane lives get a glimpse of the celestial and eternal.  Since this timeless worship is carried out by frail and sinful human beings, it will never be perfect.  The reader might have an irritating chanting voice, the priest might like to give hurried and confusing homilies, the altar boys might trip over themselves, folks might have a devotion to the Rosary (and all of your online forums have told you these people will burn in Byzantine Hell for their Latinizations), etc.  Again, parishes are not museums, and I’ve come to know, understand, and appreciate that.  I am, in a sense, even more aware of my unworthiness to participate in the Divine Mystery when I see how I (and others) fall short of the glory and majesty the Divine Liturgy attempts to convey.  This also contributes to what I can only describe as the “family feel” of every Byzantine parish I’ve ever attended.

This may be my slightly nicer way of hinting at an aspect of most Byzantine parishes I’ve visited—disorganization.  As Latins, we tend to inherit the mindset of the original bearers of the name our Church bears—the Ancient Romans.  The Romans devoted themselves to law and order (along with roads and plumbing, this is what they used to justify tributes and taxes).  Similarly, the Latin Church has a long tradition of applying precise legal thinking to ecclesiastical situations, as well as concretely defining rubrics (although these things went out of vogue in the 60s-90s, they are coming back in a big way).  Altar servers can become liturgical drill teams turning on a dime and never missing a genuflection or bow, cantors have solos that make you feel like you’re at an operatic concert, the parish coffee hour has its own set of prescribed rituals promulgated by the USCCB, etc.  It can be frustrating, then, when the attitude seems more relaxed, there seems to be a lot more (what looks to our structured Latin eyes) “wandering around,” the choir is just a bunch of folks who were daring enough to volunteer, etc.  Again, it’s a quality that has attracted me.

Sure I know some larger parishes are a bit more regimented, but there’s always that element lurking somewhere of “we’re worshiping as a family and sometimes that means Dido is going to belt out the tropar and kondak off-key and we’re all gonna chant along with him.”
Again, these are merely my small, limited observations from parishes I’ve visited in the Midwestern US.  This won’t be everyone’s experience, but it is this experience (along with some of the theological emphases I don’t want to bore anyone with in what was supposed to be a short article) that has called me East."

Thank you for sharing your thoughts, Nicholas! We'll be praying for you during this new part of your spiritual journey!