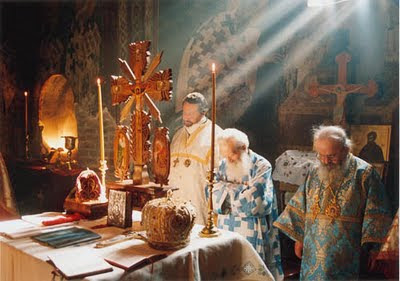 Take a look at this photo of a pontifical Divine Liturgy. Was the photo taken yesterday- or perhaps 1,700+ years ago? It is difficult to say. It looks beautiful and ancient and mystic and reverent and very different from the Roman-rite Mass. certainly it doesn't look 'liberal'- even though they have married priests.
I probably shouldn't peruse blogs at 6:45 in the morning Monday morning when Saturday and Sunday's cortisol is still surging in my veins. But I did, and I came upon this comment at Fr Z's blog- "What’s deplorable about this all too common tactic is that the Church didn’t have a pedophilia problem – it had a homosexual problem. Acceptance of homosexuality is on the agenda of the modernist/liberal element along with female ordination, married priests, universal salvation, social justice, etc." I understand where this man is coming from; he is afraid of the negative moderization of the Church, and he is coming from a Roman-rite perspective. He is not, however, a rare case who equates a possibility for a married man to be ordained priest with the acceptance of homosexual behavior and woman 'priests.' This comes up very frequently in the blogosphere and in casual conversation.
What these commenters always seem to shy away from is the possibility for married men to be ordained priest and the history of the Church. While it would take logistical changes for it to be a common occurrence, a married priesthood in the Roman-rite (along with many celibate secular priests who chose not to be married and the monastic tradition) would not destroy the Church. It is a possibility, and it is a tradition that remains in the Eastern rites.  Although a married priesthood commonly occurring won't happen, it should not be spoken of in the same breath with accepting homosexual activity and women's 'ordination.'
Yes, yes- he was speaking of the Roman-rite and one doesn't have to constantly qualify one's remarks with "in the Roman-rite." We Eastern rite-types- a minuscule percentage of the Catholic world- should remember to "mind our own business." But it pains me that it seems that this attitude is very common- thinking that a married priesthood is liberal and non-Catholic.  Perhaps a married priesthood would be done for modernist reasons. But the attitude of fear signals bad things for ecumenism. How can we pray for unity with the Orthodox when their traditions would be disrespected and perhaps made canonically impossible (as happened in the US 100 years ago through Bishop John Ireland and led to the formation of the OCA)? 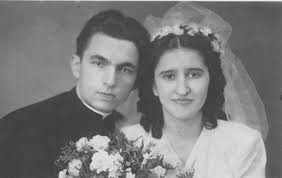 A photo of a Byzantine Catholic seminarian and his wife before his ordination to the diaconate and priesthood. In the old country, seminarians wear clerical garb, and this would have been his most formal suit to wear. In the old country, no one is confused between seminarian, deacon and priest- all wearing clerical garb. People simply ask "are you a priest?" before they ask for confession or the like.
shared by priest's wife - S.T./ Anne Boyd at 1:06 PM