For nearly 10 years the current Archbishop of Chicago, Cardinal George, has been a patron of the ecumenical work of the Byzantine Catholic monks of Holy Resurrection Monastery. On Saturday, May 12 2012 His Eminence was able to visit the community at their new home in the small village of St. Nazianz, Wisconsin. 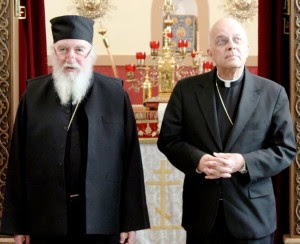 The Cardinal was in Wisconsin to give the commencement address at St. Norbert’s College in De Pere, near Green Bay. On his way up, he was able to stop off for a short time to join the Eastern Catholic monks for a little prayer and fellowship. His Eminence was accompanied by his secretary, Father Dan Flens. During his time with the monks the Cardinal expressed his satisfaction with their lovely new home, and said he hoped and prayed that the monastery would thrive there.
reprinted from Holy Resurrection Monastery Online.
shared by priest's wife - S.T./ Anne Boyd at 4:11 PM