"When I look around in a beautiful church one of the things I notice as much as the artwork is where the artwork is placed. Placement of the artwork can mean as much as the content of the art. Big thick books could be written on this subject, but I don't have that attention span. Here are some examples of the use of space that many people may not realize.
For instance, the area around the altar will have images relating to sacrifice. My parish has icons of Abraham's almost sacrifice of Isaac and Abel's sacrifice of first fruits. St John the Baptist Cathedral in Savannah, GA has images that subtly refer to the events from the Last Supper up to the Resurrection. On the left is a chalice with a cross emerging from it and the story continues in images to the right until the Resurrection
Traditionally, there is a higher ceiling above the altar with either artwork evoking the glory of God such as the Christ Pantocrator or a painting of the sky. The idea is to use this space above the altar and on the ceiling to both lift the eye to the Heavens and the soul with it to God. It also evokes the idea of Heaven and Earth united during the Mass/Divine Liturgy, that the Most High God has revealed Himself to His Church and JesusChrist condescended to become a Man and the sacrifice of the God Man is continued on the altar below. I really enjoy the way that older, traditional Roman altars are tall, often with spires pointing upward towards the space above the altar.

Traditionally, churches have been built in a cruciform style. This crossing of the transept and the nave further emphasizes the sacrificial aspect of the Eucharist. There is a church in Kaiserslautern, Germany where the apse for the altar is not aligned straight with the nave, but instead is about a 45 degree angle from the nave. According to local legend this is to resemble a the limp head of Jesus Christ as He hung dead upon the cross. 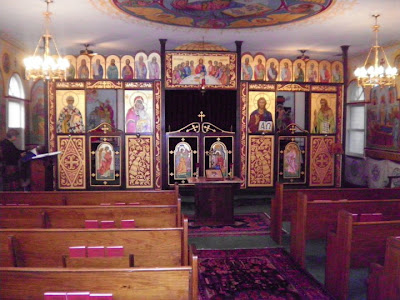 In Byzantine Churches it is traditional to have an iconostasis, a wall of icons between the nave and the Holy Space. This barrier is lifted at moments of Revelation such as Gospel readings when the Royal Doors in the center of the iconostasis are opened and this opening between the two emphasizes the connecting of the two through the mystery of the Incarnation.
Another example is when a patron saint is portrayed in a relevant area, like in Sacred Heart (a former Jesuit parish in Augusta, GA) a stained glass window of St Cecilia is in the choir loft next to the organ. Or when saints with something in common are portrayed together or near each other.

Sacred Heart, for instance, has five stained glass windows in the apse of the main altar. Directly behind the altar is Christ the High Priest. On his left is St Patrick and on his right is St John the Evangelist. On St Patrick's right is St Ignatius of Loyola and on St John's left is St Francis Xavier. So the space is used to portray that bishops (Sts. Patrick and John) have a share in Christ's priesthood and priests (Sts. Ignatius and Francis) share in their priesthood, but that Christ is source of the priesthood. He is shown above the altar with his arms outstretched in blessing, but when it was still a church there would have been a crucifix on the altar.
We are body and soul, which means that we have spiritual experiences through our sense of sight."

Many thanks for your guest post! You can read more from Chris at 50 Days After
shared by priest's wife - S.T./ Anne Boyd at 5:30 AM