Sometimes it seems as if the division between East and West is insurmountable. We say 'Alleluia' during Lent; the West does not. The West trembles at a few days with no meat during Lent while those in the East are 'liberal' if they partake on Sundays and then are in danger of falling into pride if they are successful with the fast. The West prays the stations of the cross while the East prays the Liturgy of the Presanctified Gifts.

One might think that this 'communion service' would be a quick devotion, but like most things in the East, there is nothing quick about it. The more I am able to participate in this service, the more I learn. It is a great opportunity for Eucharistic adoration during the Lenten season.

One reason why this Byzantine (and Orthodox) liturgy is so special is that it actually a sign of the unity in liturgical Christianity. The Presanctified Liturgy is attributed to St Gregory. Which St. Gregory, you ask? St Gregory  Nazianzen, also known as the Theologian and friend of St Basil the Great? St Gregory of Nyssa, brother to the same? No- it was St Gregory the Dialogue- better known as St Gregory the Great, Pope of Rome. A bishop of Rome wrote a liturgy that we in the East pray with great devotion. This should be an open door for unity. 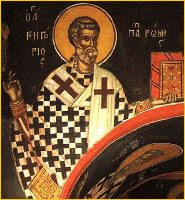 "St. Gregory's family had large land holdings in Italy, which St. Gregory sold to help the poor following his father's death. After turning his home into a monastery named for St. Andrew, Pope Pelagius II appointed him as an ambassador to Constantinople; however, Gregory disliked the worldly atmosphere of the court and never learned Greek. After his consecration as Bishop of Rome on September 3, 590, he negotiated a peace with the Lombards, who besieged Rome, and he dispatched St. Augustine of Canterbury to evangelize Britain.

He is known in the East as Gregory the Dialogist for his four-volume Dialogues, in which he wrote of the lives and miracles of the saints of Italy and of the afterlife. It is the primary source of the lives of St. Benedict of Nursia and his sister Scholastica. He was a patron of ancient Western chant, often called "Gregorian chant" for his patronage. In the East, the Liturgy of the Presanctified Gifts celebrated during Lent commemorates St. Gregory as its author. St. Gregory reposed on March 12, 604. " (excerpted from orthodoxwiki)
shared by priest's wife - S.T./ Anne Boyd at 6:14 PM