What are you giving up for Advent?

Surprised by the question? This is a very common question before the Great Lent before Easter. But almost no one thinks of sacrificing during the upcoming pre-Christmas season.  It is time for peppermint and parties, eggnog and sleigh rides with Christmas carols blaring across the snow, a time to explore neighborhoods filled with Christmas lights. The office party is coming up; time to chose a funny 'white elephant' to exchange. Christmas will be basically over on December 26th with a little quiet until the new year.

I've decided to fast not only from meat and animal products (as prudently as possible with my health issues) during this Nativity Fast; I am fasting from my blog until Epiphany/Theophany (January 5/6). A fasting season should be a time when one increases prayer and good works, so taking time off from the computer will help with that goal. If some brilliant post idea comes to me, I'll write it as a draft and 'polish' it after the Christmas season. Maybe I will have many half-written pieces and get a jump-start on the new year!..and I'll also be checking in here to release any comments that blogger might put in the moderation queue....and I hope my artist will work on her alphabet drawings so I can continue my Byzantine Child's ABC book (hint....hint....)

I'm sure that there will be great Advent/Christmas posts around the blogosphere this year. Click on my Christmas, feasting, and fasting labels (to your right somewhere) for my older posts on those subjects. 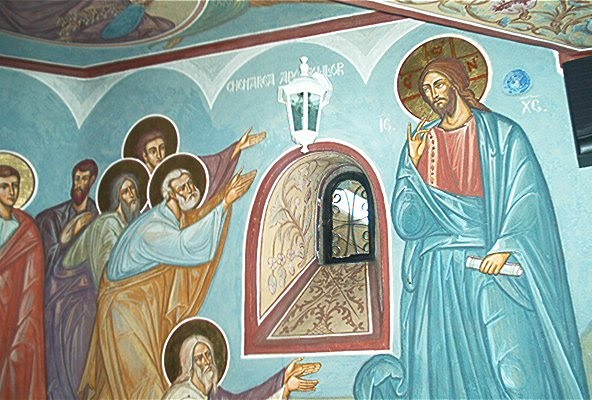 "In the Orthodox and Byzantine Catholic Churches, the period from November 15 through December 24 is a period of Fasting, Abstinence, and Preparation for the Great-Feast of the Nativity of Christ. One of the four major fasts of the year, it is variously called the Nativity Fast, the Christmas Lent, or the Philipine Fast (since it begins the day after the feast of St. Philip).

No matter what it is called, however, it is one of most difficult fast periods for people living in the Western world to keep. The pre-Christmas period in America is generally one of parties, social events and general excess. How is the Orthodox Christian to follow the Tradition of his Church, but also live in his native culture?

Part of the difficulty lies in our society's inability to understand the necessity of anticipation and waiting. We are so used to instant soup, instant replays, and instant gratification, that the concept of pre-paring for a feast by fasting does not set well.

Coupled with this is a loss of a strong sense of sacred time and season. We move holidays (and Holy Days) to accommodate to "practical life," rather than vice versa. "A time for everything and every-thing in its time," has become "Everything all of the time...when I want it." continue at Byzantine Catholic.org for specific fasting guidelines


I wish you a blessed Nativity Fast and a wonderful, joy-filled Christmas season and a very happy, holy and safe new year! I hope to 'see' you all back here after Theophany/ Epiphany 2014!
shared by priest's wife - S.T./ Anne Boyd at 11:30 PM