If you are Roman-rite Catholic, you know the drill. It is time for Little John's First Communion. Did he sign up for catechism classes on time? I hope you didn't miss the first meeting! Yes, that's right. That will be two years of weekly classes in the evenings if you are public schooled or homeschooled. And everyone does what the pastor and DRE deemed necessary to receive the sacrament.

Your lovely family of seven wants to become Roman-rite Catholic? How wonderful! It is too bad that you didn't notify the parish office in time for the first RCIA class. Yes, you will have to delay entering the Church another year. Sorry, if we change the rules for you, everyone will want to skip out on a few classes. That wouldn't do at all. So everyone does what the pastor deemed necessary to receive the sacraments.

If you are Orthodox Christian, you know the drill, you can't just waltz into any Orthodox church and receive the Holy Gifts of Jesus' Body and Blood.  How would the priest know if you had just been to confession? How would the priest know if you had conformed to his eparchy's guidelines for fasting? How would he even know if you are a baptized and confirmed Orthodox Christian? So, the Eucharist will be denied to those who did not make arrangements with father. So everyone agrees and does what the pastor deems necessary to receive the sacrament. 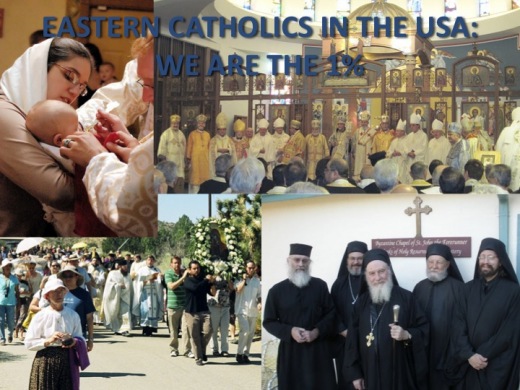 (really- less than 1%- as I have been reminded)
While Roman-rite Catholics and Orthodox Christians are the lion and the eagle (I'm not sure which should be which), The Byzantine rite (and other Eastern Catholic rites- but I don't have real-life experience with them, regrettably) is the mouse. The mouse hides quietly, trying to survive even though there is really no reason why it should. If the mouse is quiet, maybe the enormous animals will leave it be. The mouse is nothing- just a mouthful. Maybe the mouse will be permitted to live another day. We Byzantine Catholics wait with bated breath; will this Pope permit our tradition of married men being ordained priests? Will my local Catholic school force my child to take First Communion classes even though he has been receiving since he was 40 days old? Some Byzantine Catholics are eager to throw off the term catholic so that the Orthodox will welcome us. Once there is unity we won't exist! We are truly "Orthodox in union with Rome!" I suppose so, but did St John Chrysostom use the label 'orthodox?'

The Byzantine, with his inferiority complex, sees himself as nothing- as something that Rome can crush and that unity with Orthodoxy will make redundant. The Byzantine welcomes visitors and converts, knowing in his heart that they will most likely leave for the convenient pastures of the Roman-rite or the strict-never sit-vegan-Pope-free waters of the Orthodox. Or perhaps this is all too serious, debating pews or no pews, skirts or pants, veiled or non-veiled, married or celibate- and the visitor decides to save himself the aggravation and just listen to AirOne with his Sunday morning coffee and internet news. The Byzantine doesn't think much of himself or his religion, so even he will be tempted to leave once the priest breathes in the wrong place while singing the Gospel or the priest isn't totally flexible with sacramental prep's time and place (what else is he doing with such a small community?) or the cantor's singing isn't as exquisite as the Orthodox parish or a special new Bible study opens up at the local mega church "The Branch" or his children demand to attend the Roman-rite parish like normal kids.

This is anecdotal, but 100% truth. This is the kind of post that upsets my lovely Roman-rite friends who say, "your husband is an amazing priest and we hear that the Byzantine rite is lovely!" But they have never visited...I suppose with my bordering-on-despair-attitude, they don't have a reason to visit.
The joy of the Lord is my strength- not my joy.
shared by priest's wife - S.T./ Anne Boyd at 9:20 PM