Priest-husband has bi-ritual faculties for the local Roman-rite archdiocese. This means that he is available to help 'supply' Roman-rite parishes who might be short on help. He regularly celebrates the 6:30 AM (sometimes 8:30 as well. We don't leave for our Sunday mission until 10) Sunday Mass as well as help with confessions and his hospital weekday Masses. So nowadays, people are surprised that he is married after seeing him in a 'Roman' capacity with no wife or children in tow. 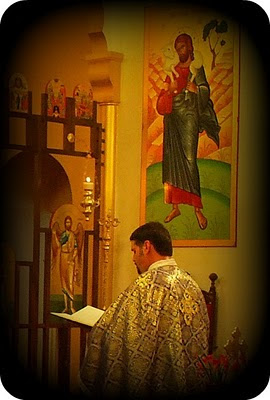 Not much has changed in the two years since I published the following post. I do feel a bit more hostility and/or desperation from those Catholics who are against the possibility for a married priesthood. Roman-rite Catholics who do not feel comfortable with any married clergy sometimes see my husband as a threat because there are already 10 married deacons at this 'mega-parish' in contrast to 2 priests. Too many married men (and occasionally their wives) are around. But the silent hostility I feel most is with fellow Byzantine Catholics from a different jurisdiction than mine that does not (or very, very rarely- perhaps sometimes accepting a man from an old country) ordain married men in the United States. Although some are lovely and friendly, most of the believers from this community ignore me- look me in the eye while I am greeting their priest, frown, and remain silent when they are three feet away from me. My married priest husband replaced their priest for almost 3 months over Advent, Christmas, and the New Year 2 1/2 years ago with nary a stipend, but I can't get a nod or smile.  Ah well. The legacy of Bishop John Ireland continues.
In any case- Here's the replayed post from October 2010- After the initial shock of seeing a guy in clerics with a group of little kids calling him "Daddy"-  it usually goes like this with one or more of the following 7 questions or comments:

Well, it is certainly unusual for a Catholic priest (of any rite) to be married in the United States.

2. "That's great! Father John Western-rite should get married, too!"

First of all, ordination to the diaconate and priesthood come after Christian marriage where permissible. So, it's too late for Fr. John to be married unless he asks his bishop to set aside his priestly faculties. In the Eastern rites, married priests cannot remarry after their wives have died. It is the order of the sacraments at play; any man ordained a priest should 'stay the way he is.'
Also, priestly celibacy in the Western-rite is a long tradition- as much as married men being made priest is in the East. This tradition should not be treated flippantly with a "married priesthood, why not?" Books have been written on the gift of celibacy, a concept that we in the East also respect with monastic life.

Um, no. Not possible. You might find us priest's wives more traditional than the average Catholic. We like our incense, altar boys, and our role as women in the Church. Mary the Mother of God, Martha, her sister Mary and Mary Magdalena all had honored roles in the ministry of Jesus. He didn't make them apostles even though He allowed them to sit at His feet and listen to Him preach. I'll remain in the company of these women and try to serve God by their example.

No- and we aren't Anglican, either. The Pope is our boss, and he likes us!

5. "It must be really burdensome on your church to pay for a family."

Yikes! Are you really discussing money with me, a stranger? Well then, I must tell you that my husband receives a stipend (and no living expenses like house, food, insurance, car) from our 'big' mission and not one farthing from the 'little' mission. He supports himself and his family through his full-time job as a certified chaplain.

6. "That's a bad idea; a priest should have only church and God to be concerned with. Your husband can't possibly be dedicated to God, the Church and family. It's just too much."

Sometimes it does feel like too much. Like many families with a busy life, we have to be flexible. Frequently we celebrate holidays the day before or the day after to accommodate his schedule. Christmas presents are opened in the evening. With three Master's degrees between the two of us, we live in a small house in one of the most expensive areas of the United States so that Fr. can minister at the two missions.

It is not necessarily a good thing, but we have no day off. If Fr. has any time to relax, he'll take the kids fishing or to a movie. While a celibate priest might go golfing with friends or practice another hobby, my husband doesn't have large blocks of time (like a half day) to pursue interests that don't directly correlate to church, work or family.

My husband doesn't want to be 'that priest' that didn't take the time to be a shepherd, so he always makes time for parishioners. He answers his calls. No gate-keeper, we are too small. He will celebrate Mass in your home for your anniversary. Homes are blessed at the New Year and when it is requested. As you see, I think he is doing a stellar job.  Even though this life is challenging, I think it is a bit like love for our kids. The love grows. It doesn't diminish. Having two big vocations is difficult, but not impossible through God's grace. Pray for him that he fulfills his priestly vocation well!

7. "Is it hard that his vocation to the priesthood is an eternal one while your marriage is only here on earth?"

Is it possible that I share in the priesthood of my husband? When we were married, we became one. Then, he was ordained deacon and priest, a priest forever according to the order of Melchizedek. His ordination actually put an eternal mark on his soul while all I got was an overnight, self-led retreat in preparation for this change in my husband and our marriage.

I might share in the practical side of his priesthood. I lead singing when I need to and step aside when another person wants to sing.  I prepare food for after the services and try to keep my little ones behaving in church. I have supported his priesthood by moving across the country twice, once with a 4-month old baby and a 4-week pregnancy. I try to subdue my feminist tendencies of wanting to be the leader. My husband is the 'important one,' and I wish I could be like Terese of Lisieux who was content to used as a broom and put back into the corner when not needed.

There is a huge part of my husband's life that I can never understand or participate in. This is probably the strongest argument against a married priesthood in any rite. We priest's wives cannot fathom the feelings of being at the altar or the confessional. These experiences are hidden from us. God's grace abounds in these situations, but I suspect the evil one is lurking in the shadows, waiting for us to fail. Evil doesn't like husbands, fathers or priests. So it is a lot to say yes to these vocations.  All we wives can do is be positive complements to our  priest husbands like any wife. Pray for the wives and children!