The Greatest Man Born of Woman

CONCEPTION OF FORERUNNER & PROPHET JOHN THE BAPTIST - 23 SEPTEMBER
TROPARION
Joy to you, O barren one unable to give birth! Behold, you conceive today the one who is really a Torch of the Sun, who will enlighten the whole world that suffered from blindness. Rejoice, O Zachary, and cry out in all confidence: "The One who will be born is a Prophet of the Most High!".
KONTAKION
Zachary rejoices greatly with his wife Elizabeth, for she has conceived John the Forerunner whom the angel announced in gladness. As for us, we honor him in witness of this blessing. 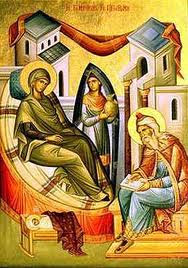 NATIVITY OF FORERUNNER & PROPHET JOHN THE BAPTIST - 24 JUNE
TROPARION
O Prophet and Forerunner of the coming of Christ, in spite of our eagerness to render you due honor, we fall short when singing your praise. Your glorious birth saved your mother from the shame of barrenness, returned to your father the power of speech, and proclaimed to the world the Incarnation of the Son of God.
KONTAKION
The woman who had been barren becomes fertile and gives birth today to the Forerunner of Christ. He is the greatest and last of the prophets, for standing in the waters of the Jordon River, he placed his hands on Christ whom all the prophets had announced, and in so doing he became a prophet himself, a preacher and a forerunner of the Word of God.
icon found at This is Life
shared by priest's wife - S.T./ Anne Boyd at 6:05 PM