The Nicene Creed- series on the Divine Liturgy

PEOPLE: I believe in one God, the Father Almighty, maker of heaven and earth, and of all things visible and invisible. And I believe in one Lord, Jesus Christ, the only-begotten Son of God. Born of the Father before all ages. God of God, Light of Light, true God of true God. Begotten, not made, of one substance with the Father. By whom all things were made. Who for us men and for our salvation came down from heaven. And He became flesh by the Holy Spirit of the Virgin Mary: and was made man. He was also crucified for us, suffered under Pontius Pilate, and was buried. And on the third day He rose again, according to the Scriptures. He ascended into heaven and sits at the right hand of the Father. He will come again in glory to judge the living and the dead. And of His kingdom there will be no end. And I believe in the Holy Spirit, the Lord and Giver of life, who proceeds from the Father (and the Son). Who together with the Father and the Son is adored and glorified, and who spoke through the prophets. And one holy, Catholic, and Apostolic Church. I confess one baptism for the forgiveness of sins. And I await the resurrection of the dead. And the life of the world to come. Amen. 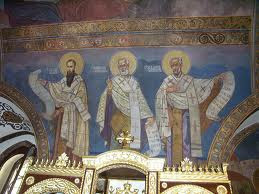 PRIEST: Let us stand well, let us stand with fear, let us be attentive, to offer the holy oblation in peace.

PEOPLE: The mercy of peace, the sacrifice of praise.

PRIEST: The grace of our Lord Jesus Christ and the love of God the Father, and the fellowship of the Holy Spirit, be with   all of you.

PEOPLE: And with your spirit.

PRIEST: Let us lift up our hearts.

PEOPLE: We have lifted them up to the Lord.

PRIEST: Let us give thanks to the Lord.

PEOPLE: It is proper and just to worship the Father and the Son and the Holy Spirit, the Trinity, one in substance and undivided.

Priest (silently): It is proper and just to sing hymns to You, to bless You, to praise You, to thank You, to worship You in every place of Your kingdom; for You are God ineffable inconceivable, invisible, incomprehensible, ever existing, yet ever the same, You, and Your only-begotten Son, and Your Holy Spirit; You brought us forth from non-existence into being, and raised us up again when we had fallen, and left nothing undone, until You brought us to heaven and bestowed upon us Your future kingdom. For all this we give thanks to You, and to Your only-begotten Son, and to Your Holy Spirit, for all that we know and that we do not know, the manifest and the hidden benefits bestowed upon us. We thank You also for this ministry, which You have willed to accept from our hands, even though there stand before You thousands of archangels, myriads of angels, Cherubim and Seraphim, six winged, many-eyed, soaring aloft on their wings 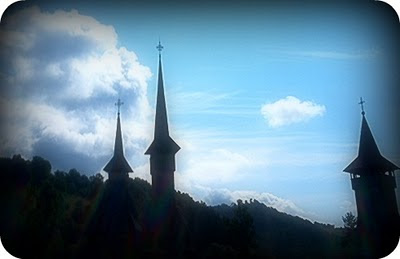 I love the silent prayer that the priest prays at this time- but I have to say a bit about the Nicene Creed and the inclusion or exclusion of the Filioque (Holy Spirit proceeded from the Father and the Son). Some Byzantine Catholics include the Filioque; others do not. This is yet another place the Byzantines are stuck in the middle. Two different perspectives can be found at Orthodoxwiki and Catholic Answers.

This quotation from the Eastern theologian Fr Patrick Reardon might explain why we have theological debates between Catholic and Orthodox (do the Orthodox really dismiss the Immaculate Conception? I don't think so- but they were not part of the discussion when the Pope declared it dogma)--- "I believe that the filioque controversy is not about the composition of the Holy Trinity. It is a controversy about authority in the Church. The East’s objection to the filioque is formal, not material. The East’s objection has to do with a canon of the Council of Ephesus in 431, which anathematizes anyone who adds to the Nicene-Constantinopolitan Creed." Even though I think practical matters are barriers to unity more than these lofty theological problems, the filioque-problem will be with us for a long time.
shared by priest's wife - S.T./ Anne Boyd at 7:25 PM