We're on a Mission from God

What's wrong with this picture? As Blessed Pope John Paul II said, "The Church must breath with two lungs." Here the West is represented by dancers as they might have looked when Saint Juan Diego received the visions of the Virgin Mary, Our Lady of Guadalupe in 1531. The East is represented by Saint Nicholas, the Bishop of Myra (in today's Turkey) and an important father of the Church who was at the Council of Nicea in 325. 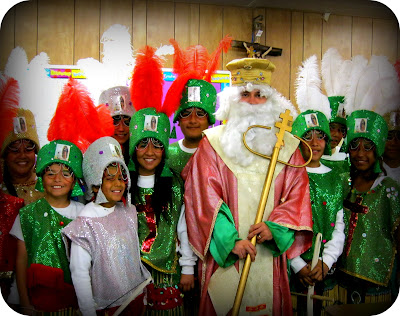 Some 'quick takes' on how building a small Byzantine Catholic mission community into a viable parish is not easy in today's world.

We are blessed to be able to celebrate Divine Liturgy for the 'small' mission at a large Roman-rite chapel on Saturday evenings. They also allow us to have fellowship afterwards in their small hall. They even allow us to store our portable icons for the icon screen. But last Easter vigil, we couldn't use the space because the main community wanted a vigil. Imagine if you went to church every week except Easter! (we had the Liturgy in a different place, but most members simply went to the local Roman-rite Mass) Not a good way to build a community.

We were going to celebrate the Liturgy as usual last Saturday evening and we planned an early St Nicholas celebration. But a few days before, we were informed that it would be a Spanish language, Roman-rite Mass to begin the novena for Our Lady of Guadalupe and my husband would be the only priest celebrant (he has bi-ritual faculties for this archdiocese) along with two Roman-rite married deacons.

So, Byzantine St Nicholas still visited and we served old country poppy seed and nut rolls along with the Mexican sweet bread and horchata, but the majority of our tiny group didn't attend because they don't speak Spanish. Myself, I was a little disappointed that the Roman-rite Mass wasn't in English because I wanted to hear the corrected translation! The Spanish was correct all along.

Our eparchy (diocese) is small enough to be a mission itself and the old country does not sponsor Byzantine Catholic endeavors as they do for the state religion of Orthodoxy- so we are on our own. This is one reason why it has been so amazing to have the help of places to celebrate the Liturgy even when we have to make changes because it isn't our own 'house.'

We borrow the space late Sunday mornings for our 'large' mission from a Byzantine church with a different jurisdiction. It is a blessing, but does using a rented space limit our outreach and growth? Perhaps- but that's reality.

Yes, the title of this blog is "fear not little flock"- we'll stay little. We have no choice.This is the way of the world. I just hope and pray we will exist enough to remain at least "little" and not gone completely.