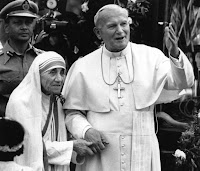 We waited outside for Mass to finish. There was a table selling religious goods, and a woman handed me some information about the Fatima Mary statue that would be visiting the parish in a few weeks. Baby girl was still crying a bit and the kind woman asked, "Why is she crying?" I decided to throw caution to the wind and told her, "Well, we are Byzantine Catholics so she usually receives the Eucharist and she is upset that she couldn't receive here." The three women at the table were shocked when I continued, stating that we receive baptism, confirmation and First Communion as infants. They asked "Why?" I tried to keep it very simple- that the historic order of sacraments for all rites was confirmation before Eucharist no matter the age of reception, and that the Eastern way emphasizes our need for grace above book knowledge, and isn't it wonderful that the Universal Church in union with Rome has so many diverse rites? The kind woman gave me a weak smile and waved her hand in the direction of the RCIA booth- she said "Perhaps you would like to look into RCIA classes?" It was nice to be invited, but since I am already Catholic, I declined her offer.
shared by priest's wife - S.T./ Anne Boyd at 5:00 AM