Romanian Catholics are proud of their saintly martyred bishops.
"Romanian Communist authorities organized an illegitimate synod of this church, which no Romanian Catholic bishop, even under torture and other pressures, agreed to attend. The synod was forced to declare that it was the will of the faithful to become Orthodox, though Romanian Orthodoxy had been available as an option for anyone who wanted to convert for centuries. In October of 1948, the Greek Catholic Church was liquidated, her thousands of churches confiscated and converted to Orthodox use. The date was intended to rub in a point: it was the 250th anniversary of the Church’s 1698 declaration of unity with the Vatican. The justification for this act was typical propaganda: the Greek Catholic bishops had “distanced themselves from the people to serve imperialist interests, obeying the Pope of Rome.” There were six authentic Greek Catholic bishops in Romania at that point. All were arrested at the close of 1948. Five died in prison (Ion Suciu, Valerie Traian Frentiu, Alexander Rusu, Vasile Aftenie, and Ion Bálan). The lone survivor, Bishop Juliu Hossu of Cluj-Gerla, spent the next 22 years in prison and under house arrest before he died, still under detention." 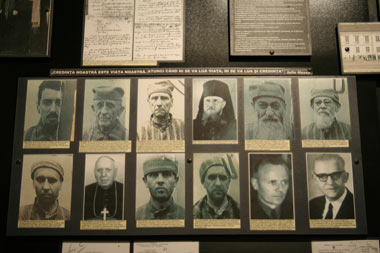 Pope Pius even acknowledged his brother bishops.
"At the beginning, all the bishops were held in Dragoslavele, the summer residence of the Orthodox Patriarch. Patriarch Justinian visited them often and urged them to become Orthodox. The government put out propaganda that the bishops had gone on a “spiritual retreat.” The regime needed at least one bishop to apostatize in order to claim that their unification of the Catholic Church with the Orthodox was licit. No bishop obliged them. When gentle persuasion failed, the bishops were separated and sent to different locations. By May 10, 1950 Vasile Aftenie, after suffering terrible tortures in the Vacaresti prison, went mad and died, even though he was a relatively young man and had been in good health. The fates of the other bishops were soon sealed in similar fashion. Of the clergy, 600 were imprisoned, about a third of them in the Soviet Union; only half survived. Pope Pius XII reacted to this slaughter with a moving statement in his March 27, 1952 Apostolic Letter Veritatem Facientes: “We desire to kiss the chains of those who, unjustly imprisoned, weep and are afflicted because of the attacks against religion, the ruin of sacred institutions, for the eternal salvation of their people, now in peril, more than for their own suffering and lost liberty.”
All of our bishops died as Byzantine Catholics, but the story isn't so pretty with the simple priests. A quarter of the Byzantine Catholic priests in Romania 'relented' and became Orthodox. One can safely assume that the majority of these were married men with children.
"One priest was thrown into a sewer full of rats for two days. He relented. Another was cast into a quagmire, with similar results. In the town of Oradea, a Father Tamian was subjected to torture by fire and electricity until he surrendered. In Sibiu, a Father Onofreiu miraculously survived being hanged when the rope broke. He still refused to accept Orthodoxy but was declared insane and released — temporarily. It is easy to understand why a quarter of the clergy, subjected to such treatment in so many different places, were not hardy enough to withstand it."
Most likely, they lacked the 'heartiness' to withstand torture because they knew that their families were at risk for torture as well.
My priest-husband is willing to work in mission territory for a stipend (in one mission- no stipend in the other), working for pay at a hospital so that he can minister to people in one of the most expensive areas in the world. He is willing to work this mission with Latin-rite Catholics, Byzantine Catholics, Orthodox, people from our old-country, from Mexico, from other places- all people with different needs and expectations and some people who do not have a 'default' setting of respecting the priest. This means that he has not had a day-off in 11 1/2 years unless he travels for a short time to my parents' home 900 miles away or very occasionally his parents' home 10,000 miles away. He is willing to drive an hour (after 9 hours in the hospital ministering to dying patients) to do marriage preparation, knowing that he will not receive appreciation, a stipend or gas money. He doesn't receive the two month summer vacations that a local celibate parish priest gets every year. People will scoff and assume that a married priest 'costs' the people much more. All I know is our specifics and compare them to the celibate priests we know.
but
could my priest-husband withstand physical torture to defend his Catholic faith? I believe he withstands 'torture' every day- ministering in a world that really has no use for God and the Church. But could he withstand actual physical torture by electricity and fire? Perhaps- if it were only he going through it. But he has a family.
All the benefits of a married clergy- a man with an emotional base, a man with normal responsibilities so he is down-to-earth and mature, a man who has a life-long partner to help him- are also the reasons why it is harder for him to die for the faith. But I know of married priests who have done it. Their families paid the price as well. As Flannery O'Connor said, "She could never be a saint, but she thought she could be a martyr if they killed her quick.”