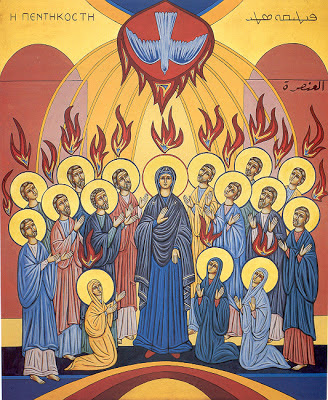 image from maronite-heritage.com
On the great day of the feast, Jesus stood and cried out, saying, “If anyone thirsts, let him come to Me and drink. He who believes in Me, as the Scripture has said, out of his heart will flow rivers of living water.” But this He spoke concerning the Spirit, whom those believing in Him would receive; for the Holy Spirit was not yet given, because Jesus was not yet glorified. Therefore many from the crowd, when they heard this saying, said, “Truly this is the Prophet.” Others said, “This is the Christ.”

But some said, “Will the Christ come out of Galilee? Has not the Scripture said that the Christ comes from the seed of David and from the town of Bethlehem, where David was?” So there was a division among the people because of Him. Now some of them wanted to take Him, but no one laid hands on Him.

Then the officers came to the chief priests and Pharisees, who said to them, “Why have you not brought Him?” The officers answered, “No man ever spoke like this Man!” Then the Pharisees answered them, “Are you also deceived? Have any of the rulers or the Pharisees believed in Him? But this crowd that does not know the law is accursed.”

Nicodemus (he who came to Jesus by night, being one of them) said to them, “Does our law judge a man before it hears him and knows what he is doing?” They answered and said to him, “Are you also from Galilee? Search and look, for no prophet has arisen out of Galilee.” Then Jesus spoke to them again, saying, “I am the light of the world. He who follows Me shall not walk in darkness, but have the light of life.” (John 7:37-52; 8:12)
shared by priest's wife - S.T./ Anne Boyd at 9:18 PM