Casey- How has being a Catholic Priest's kid affected/influenced your relationship with God?

Well when we have a question about God or the church we just ask,  that has helped us understand more about our faith and God. We are also in church much more often than other children our age.
My dad makes sure that his example at home reflects his work as a priest. So all in all it has definitely strengthened our faith. 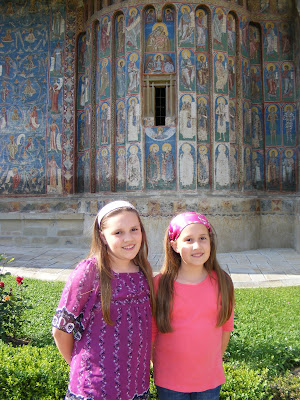 Bear- A very close friend is the son of a Dutch Reformed Church minister (a very conservative Calvinist) in a small Dutch community in a small city. He recalls that growing up, the family had to hide the packs of cards they were playing with whenever a member of the congregation visited. Also that they were watched regularly by the congregation, and their father was criticised for their behaviour. I wonder if the girls also feel the same sorts of expectation?
Yes!!!! Though not quite as severe, we are definitely supposed to be more sociable, helpful, and better behaved than your usual children. For example, when my little brother was five he was at the altar helping my dad as an altar servant. He bent down and fixed his shoe during the homily, and the elderly ladies made sure to scold him afterwards. We also have to gauge people's reactions about certain things, like if we're allowed to wear pants in the house. But many of the parishioners we have known since we moved here ten years ago so they have become part of our extended family.
It is funny, in the old country we get criticized for not watching normal television. They don't want us to be 'too' religious. We walk out of a room that is playing a music video because we are not allowed to watch that, but they think we are crazy. In America, we are too 'liberal' with stuff we watch- remember when some people on the blog got mad at my mom for letting us watch Sound of Music!?
Our mom says "You're in church right now because you are my children, not only because your father is a priest." So, sometimes it is my mom who decides our books, movies or music.

jen- What is the strangest thing you've learned about as a priest's kid?
First of all, we learn the practical reasons for some of our traditions. In the Byzantine rite, the priest or deacon waves a gold cloth over the consecrated Eucharist in the chalice while we recite the creed. You would think this represents the Holy Spirit's wind/breath, and maybe it does. But first, it was a practical way to keep flies out of the holy cup!
Another thing- when you are a priest's kid, you see all the clergy as normal people no matter how holy they are. We have monks who are friends and they are normal people who tell jokes and smile. Our bishop's mother sent me a yellow stuffed M and M toy that I (Girl 1) slept with for years.

Fluid Motion & Design- Do you feel any pressure being the child of a priest; and what have you, and the rest of your siblings done to ease whatever pressure may be felt, at times; and have you had to defend your father's vocation?
Yes sometimes we feel pressure to be perfect but it helps to know every one in your church.   Sometimes, depending on the service, we have to cantor an entire Mass in two languages and we make mistakes a lot. Girl 1 - I hide in the bathroom a little bit to "ease the pressure" Girl 2- I talk to my parents about my feelings like a chaplain (my dad's a hospital chaplain)
And answer to your second question- oooooooooh yes!!!!!! and not just about being a Priest's kid, also about being Byzantine.
We defend our dad's priesthood by trying to explain, but sometimes people will still think we are Orthodox.

Joey and Caren's Crazy Fam!- Do you have a funny story about being a priest's kid?
Girl 1: Every Wednesday we have the Divine Liturgy at 6:30 pm so all the people have heavy coats on.Well my baby sister had turned on the heater while we were singing and as you know we use a lot of incense. I could see the sweat dripping off peoples noses!!!!!!(especially my dad's)
Girl 2: This really happened to a friend of my dad. When the friend was preparing the altar for mass he had his back to the pews. He knew that the church was empty and he started to sing, "It's time to put on makeup, it's time to light the lights it's time to get things started on the Muppet Mass tonight!" The friend heard a titter and turned around and froze. The church was full of sisters there for a retreat. He hightailed it out of there!
Here is when Girl 1 worked in the bishop's office- I was a very hard worker (this is one way that we have time with dad- we work with him when we can) 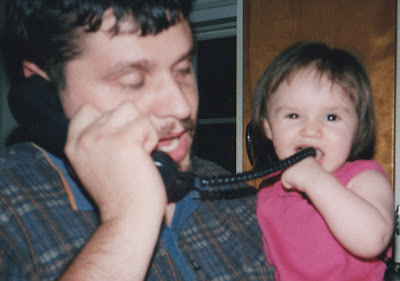 Hevel- Would you prefer if your future husbands entered the priesthood after you are married? Why or why not?
Girl 1:Yes and no, one of the problems about being a Priest's kid is that it is very lonely so I would hate to have my own children feel that. On the other hand, if my kids had a very important theological question, the answer is just a few steps away.
Girl 2: It would totally depend on if it is his vocation as a person. He would definitely have to be a practicing Catholic though, preferably Byzantine.
This is a hard question because we don't know what our lives will be like.

Sean D-  Do other Roman Catholic children with whom you are acquainted struggle with the fact that your dad is a Priest
Yes. Kids that we have known for years still do not understand that we are CATHOLIC!!!!!!!!!!!!! As we said before, it's very lonely because people cannot put us in a category. We are not one thing or the other. Even if we moved to the old country, we would not fit in there, too.We love Shakespeare, and Harry Potter is cool. Phantom of the Opera rocks and so does Funny Face (that's why it helps to have a sister your own age). We don't fit in with Roman Catholics or Orthodox. Both ignore us as a church so we are ignored as kids too.
But about them not understanding our traditions, they wonder how we can be Catholic when we don't wear a scapular.

Elisa- Do you have a favorite saint (Latin or Eastern)?
Girl 2: That is rather hard to say. It might be my patron saint Mary Magdalene (Mary of Magdala).
Girl 1: My favorite saint is St. John the Baptist (he is my patron saint), but I also really like Mary of Egypt because she showed great courage to change from her sinful life. Most people do not change, but she did.

Annie- What is your favorite feast day?
It Is Christmas because we have extended family visits, the music and the ugliness of Halloween is gone and people try to be nicer
We both like the Easter season as well, singing Christ is risen, blessing of the baskets, eating treats on the way home from a late church service.
Through the loneliness and challenges, we love our tradition and are very proud to be Priest's Daughters!!!!!!
shared by priest's wife - S.T./ Anne Boyd at 11:17 PM