1.
"....there is one thing that I can become that’s denied to my male friends…a mother. Motherhood is the most amazing thing that a woman can do in this world. Just think about it: we can nurture and protect another human life. Every single person in the world had a mother; we all spent nine months in the comfort and safety of our mothers’ womb.

So you can see why I am disgusted when I hear of abortion being propagated as a ‘woman’s right’. Abortion is an unnatural act; it goes against every protective instinct a mother has towards her child. Abortion is also the most horrendous violence that can ever be perpetrated on a woman. If you described the methods to a person who had never heard of abortion before - who hadn’t been fooled by all the pro-abortion propaganda and brainwashing - they would think that abortion was some kind of primeval torture....

We need to celebrate motherhood. Every child and every mother is a gift. Women who are frightened and anxious need our love and support. Every woman needs know that she is a life giver, that she can nurture and love her child, that she is doing the most important job in the world. I will continue to stand for every woman, every mother and every child. We must unite against this barbaric and archaic practice. We can eliminate the crisis, not the child." read the entire article at Life Site News 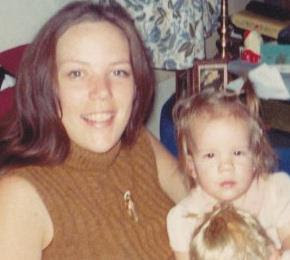 Mommy and Me (I'm 18 months and holding a baby doll bigger than I!)
2.
Two kids are talking to each other. One says, "I'm really worried. My dad works twelve hours a day to give me a nice home and good food. My mom spends the whole day cleaning and cooking for me. I'm worried sick!"

The other kid says, "What have you got to worry about? Sounds to me like you've got it made!"
The first kid says, "What if they try to escape?"
3.
Little Johnny's new baby brother was screaming up a storm. He asked his mom, "Where'd we get him?"
His mother replied, "He came from heaven, Johnny."
Johnny says, "WOW! I can see why they threw him out!" (jokes from broadcaster.org.uk)
4.
"Making the decision to have a child is momentous. It is to decide forever to have your heart go walking around outside your body."
~Elizabeth Stone
5.
“A mother is a person who seeing there are only four pieces of pie for five people, promptly announces she never did care for pie.”
-Tenneva Jordan
6.
The blog ministry 'Hannah's Tears' offers prayer support and comfort to the brokenhearted who suffer the pains of infertility at any stage of life, difficult pregnancy, miscarriage, stillbirth, the loss of a child and the adoption process.
7.
If you give a mom a muffin, she'll want some coffee to go with it.
She'll pour herself some.
The coffee will get spilled by her three year old.
She'll wipe it up.
Wiping the floor, she'll find some dirty socks.
She'll remember that she has to do some laundry.
When she puts the laundry in the washer, she'll trip over some shoes and bump into the freezer.
Bumping into the freezer will remind her that she has to plan a supper for tonight.
She will get out a pound of hamburger.
She'll look for her cookbook (101 Things with Hamburger)
The cookbook is under a pile of mail.
She will see the phone bill that is due tomorrow.
She will look for her checkbook
The checkbook is in her purse that is getting dumped out by her two year old.
Mom will smell something funny.
While she is changing the two year old, the phone will ring.
Her five year old will pick up and hang up the phone.
She will remember that she wants to phone a friend to come over for coffee on Friday.
Thinking of coffee will remind her that she was going to have a cup.
She will pour herself some more.
And chances are,
if she has a cup of coffee,
her kids will have eaten the muffin that went with it.