A few years back, I read the book Les Miserables once and then got on to various film adaptations, all the while enjoying the music to the popular Broadway musical. Thanks to the magic of netflix, I have been watching (and whistling- sorry, family!) Les Miz- In Concert the 25th Anniversary. So beautiful and edifying and full of lessons. Here are seven lessons that came to my mind while watching: 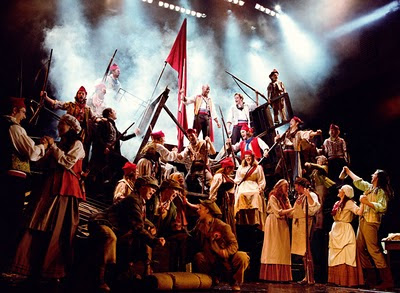 --- Charitable actions should be direct--- One of the most beautiful images in the musical comes at the beginning. Jean Valjean, a  former convict, is given shelter by the good bishop. In hopelessness, Valjean repays his kindness by stealing silver. He is caught and brought back to the bishop. Saving him from life in prison, the bishop 'buys Valjean's soul' by giving him candlesticks as well and sends him on his way. The bishop didn't need 4-color brochures or campaigns for human development or homilies about stewardship instead of the Gospel. He saw a need and filled it. Because Valjean had a personal encounter with the bishop's charity, it changed his life and he felt obliged to be a better man. In a large Roman-rite diocese, would it be possible for each of the 'rich,' established parishes to be sister-parishes with two needy parishes close by and directly aid them whenever there was a need? How beautiful  it is to know  and have a relationship with the people one is helping!
--- Comic relief is important---Les Miz can properly be called a tragedy. Some might call it depressing, but I find it inspiring for the simple fact that Jean Valjean is validated in the end. In the concert version I have been watching, you can almost hear the sigh of relief  from the audience when the silly- though evil- innkeeper and his wife come on stage. Their song "Master of the House" is a show-stopper because it gives the audience a break from the seriousness of the subject matter of the play- poverty, war, doomed love. And comic relief is important in our lives as well, so take a walk, throw some snowballs, swing on a swing, play with your kids.
--- War is futile--- Empty chairs and empty tables are all that are left after war. Women and children are left alone. Only the top administrators are satisfied, drawing new maps with new borders that will be warred over again. Les Miz shows this well. Many people assume the play is about the French Revolution of 1789, but it is about another later revolution; the poor will always be with us.
--- Nick Jonas can really sing--- I never really liked Marius- not in the book or any movie version. Cosette will be marrying a good man in Marius, but not a great man like her (foster) father Valjean. Nick Jonas, of the pop group Jonas Brothers' fame, sings the role of Marius with depth and gravity. I was pleasantly surprised.
--- Take the log out of your own eye--- Javert is a policeman obsessed with Valjean because he had jumped parole and started living a life unencumbered by the convict's yellow card. Javert's entire life's purpose is to bring in Prisoner #24601. He ends up in the river after finally realizing that the man he despised for so long actually had changed. The lesson to be learned from Javert's failure is to leave the judging to the Just and Merciful Judge.
--- Beauty is truth, and truth beauty--- Keats said it best- and it is so wonderful to see artists use their craft for something truthful and beautiful. I just love this musical- I love Cats, too- but it just doesn't inspire like Les Miz does. And life is too short for bad art, so feel free to stop watching bad television and reading gossip magazines. Is Two and a Half Men beautiful? If not, don't waste your precious minutes on re-runs.
--- Parenting equals sacrifice---Fantine sacrifices everything- her only heirloom, her hair and even her dignity- for her daughter, Cosette. Providing for her hastened Fantine's death. Valjean takes over the raising of Cosette and also sacrifices, in the end allowing her to go with Marius. Parenting is to "decide forever to have your heart go walking around outside your body."(Elizabeth Stone) and I think that is how Valjean felt with Cosette growing up. That is how we all feel when we become parents and start making sacrifices. But as Valjean feels at the end of Les Miz, all the sacrifices are worth it and there will be an eternal reward.
find many more quick takes at conversiondiary.com
shared by priest's wife - S.T./ Anne Boyd at 3:00 AM