"If I can unite in myself the thought and the devotion of Eastern and Western Christendom, the Greek and the Latin Fathers, the Russians with the Spanish mystics, I can prepare in myself the reunion of divided Christians. From that secret and unspoken unity in myself can eventually come a visible and manifest unity of all Christians." --- Thomas Merton 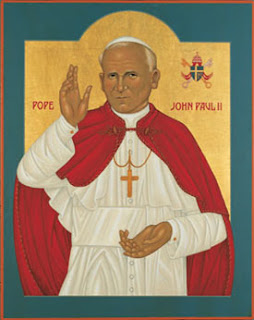 "Many will remember Pope St. John Paul II’s words from “Ut Unum Sint, “the Church must breathe with her two lungs”–its Eastern one and its Western one. In writing this, our late Holy Father was referring to the need to unify the East and West as one Church to combat the dangers of secularism and grow in cultural, intellectual, spiritual, and geopolitical strength. To be clear, the pope was not specifically exhorting individual Catholics to become bi-ritual. His encyclical calling for a balanced resuscitation and cooperation between the main traditions of the Church arose from a predominance of the Latin tradition while the Eastern tradition became more obscure. But, in the effort to achieve this balance, it can fall to priests and teachers to open the minds and hearts of individual Catholics to the liturgies they are not familiar with. With this knowledge, the Church herself might begin to breathe more fully and grow in health and strength. It is to this end that a bi-ritual experience in the context of education can help further this holy objective by making the world of liturgy full and fulfilling to those for whom it has grown stale or, what is worse, stultifying." --- by GREGORY DIPIPPO .... continue at New Liturgical Movement
shared by priest's wife - S.T./ Anne Boyd at 11:29 PM