A Reluctant Review of The Little Oratory's Introductory Sections

I was so excited to learn about The Little Oratory written by Leila Lawler and David Clayton that I pre-ordered three copies from Amazon within minutes of learning about the book. I am terribly notorious for procrastinating and forgetting, but not this time. I might have been one of the first to get a copy besides family of the authors. Sophia Institute Press emailed me through this blog, asking if I wanted a copy to review. I emailed back, saying that I had ordered three copies, but a fourth would be welcome. I was planning on using it for a book club with homeschooling mothers and wives of the local Catholic university's tutors.
This is not my official review because I haven't gotten through the beginning sections, "About the Images" and "What is this book about?"
I am glad that this is a micro-blog because I am about to write in opposition (well, just about the first two sections; I still have high hopes for the rest of the book) to the educated, well-known critics who laud the book such as Scott Hahn, Stratford Caldecott, Joseph Pearce, Elisabeth Foss, Christopher West and more along with many five-star reviewers on Amazon. 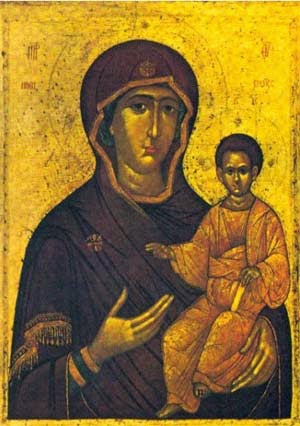 So, I got the book- well, three copies of it. I eagerly opened one up, not even bothering to sit down. And then I got to the part "Do we write or paint icons?"

Clayton chides those who still insist on saying "write" instead of "paint." He states that the original Greek has no difference between the words. It is a "bit precious" to say we "write" icons, and it is linguistically incorrect. Knowing this, I personally say "make" an icon. But sometimes a linguistic mistake can be a happy accident. saying "write" does set icon-creating apart from other sacred art.
I don't know about Western-style sacred artists, but in the East, there tends to be a very strict system to creating art with icon painters. The entire work of art is a prayer. There is little to no innovation in making an icon which emphasizes the timelessness of truth and also diminishes the artist. It does not matter who made this 'window to heaven.'
I know an Orthodox priest's wife who is a very accomplished icon painter- she painted an entire cathedral in Romania- who paints the face of Christ only on Fridays and after she has fasted from all foods from midnight. I think she would appreciate being set apart a bit with the incorrect word "write."

In the biography portion, it states that Clayton is both an experienced icon painter and a portrait painter in the style of Western classical naturalism. What I don't understand is- why does he contribute primarily Byzantine-style icons (all except a reproduction of a Gothic Franciscan cross) instead of Western portraits if he has so little regard for the art form? Why did he decide to open each chapter with a icon-style sketch instead of a classical piece of his work? It just seems strange, like he wrote the following words on a bad day and he forgot to delete them from his hobby blog:

"The iconographic style is not inherently superior to other liturgical forms, and there are no writings of Church Fathers that even suggest it (although you might not believe it to talk to some people today)."

I dropped the book like a hot coal.
I am so tired of our tradition being used by others and then tossed aside when it gets tedious. It is reminiscent of my husband celebrating two Roman-rite Masses for a group dedicated to the icon of Our Lady of Perpetual Help. The third Mass when they discovered he was a married Byzantine-rite priest with bi-ritual faculties, they asked him not to come back. I am not an art philosopher, but it seems to me that the ancient styles of art are superior to the affected modern styles. The images not made by man- Veronica's veil, the Shroud of Turin and the tilma of Our Lady of Guadalupe- seem icon-like to me, simple and stark, not showy or innovative. And I will respectfully disagree with Mr. Clayton that "no writings of Church fathers even suggest" that iconography is more rooted in the divine than other sacred art forms. The early Church fought for the restoration of icons because they are important to our spirituality. They were used in both East and West; the only difference is that the West continued to innovate and create new styles of sacred art. Sometimes these innovations can be a distraction from the truth that art is trying to convey.

The book stayed on my dining room hutch, accusing me of being overly sensitive.
A few days later, I tried again and read the "What is this book about?" section. I settled into Leila's comforting tone and calmed down until I got to the last page. I was told to seek guidance from those in authority, that the book is just a guideline to prayer in the home, that "some people belong to the Western rite and some to the Eastern rite."
Sigh.
The book went back to the hutch.
I didn't think I would need a big 'trigger warning' before reading this lovely, yes lovely, book. First, my Byzantine traditions are belittled with flippant words by an educated Catholic who is an expert in iconography and depends on using it for the beauty of his book. Then, a woman who I respect and who has personal experience in Eastern Christianity (specifically Coptic) reduces the East to one rite. In actuality there are many rites of the East - Byzantine, Alexandrian, Syriac, Armenian, Maronite, Chaldean and 21 sui juris churches (for example- Romanian Byzantine, Syrian from Antioch). All are in union with Rome's authority but retaining their traditions and spirituality just as the Roman rite (with its own diversity such as the Novus Ordo, Tridentine and Anglican-use Masses) retains its own traditions and spirituality.
So, this is me, trying to 'keep it real.' I understand that I am not the audience for this book- Hahn, Pearce, Foss and West are. But may I use another common psycho-babble phrase?
'Check your privilege.'
Yes, you are powerful; you are important. The Eastern rites are minuscule and inconsequential to the world. But we are not inconsequential to God. "Are not two sparrows sold for a cent? And yet not one of them will fall to the ground without your Father's will. But the very hairs of your head are all numbered..." Matthew 10:29. The world cares about the powerful, not the little, useless sparrow, but God loves us as He loves everyone, powerful or weak.
Yes, it was just a few sentences. Clayton doesn't believe there is anything special about icons even though he uses them throughout the book. It was the absence of just an 's' on the word 'rites.' I just hoped for factual accuracy from educated Catholics; it is hurtful when it isn't a priority. But if it isn't a priority, please ignore us.
So, tomorrow I am going to pick up the book again and read the first chapter. I am going to try to read it with the eyes of its intended audience- the Roman-rite majority. Any illusions to a rite or spirituality other than the majority rite might not be accurate, but I suppose I should be grateful that Eastern Catholics are noticed at all.
shared by priest's wife - S.T./ Anne Boyd at 12:35 AM