1. Big girls are singing "Just you wait, 'enry 'iggins" from My Fair Lady while playing a geography board game with dad. I am blogging. The little ones are sleeping. We live a wild life. My girls are convinced that Eliza Dolittle would have done better with Fred than Henry Higgins.

2. Have you ever watched 'Horrible Histories'- irreverent, but with a British accent that makes everything so much more elegant!
3.  Please pray for the Lewis family who lost two daughters- Olivia and Emma- in a car accident this week. Their father is a professor at Wyoming Catholic College. I don't know them, but their story is heavy on my heart.

4. Brilliant lifehack from my brother-in-law...use a coffee filter as a plate/napkin for those small snacks for the kids- some apple slices, a few crackers. If you use unbleached filters, you can throw it in the compost pile!


5. Boy at Lego class on Thursday morning the first week of the Great Fast- he doesn't always get a bath! We had planned a Pre-Sanctified Liturgy for Wednesday (Byzantines start Lent on Clean Monday two days earlier), but the schedule got mixed up and a visiting Roman-rite priest celebrated a Mass and distributed ashes. It was packed! Why is it that more people will come for ashes than will come even for Easter?.... 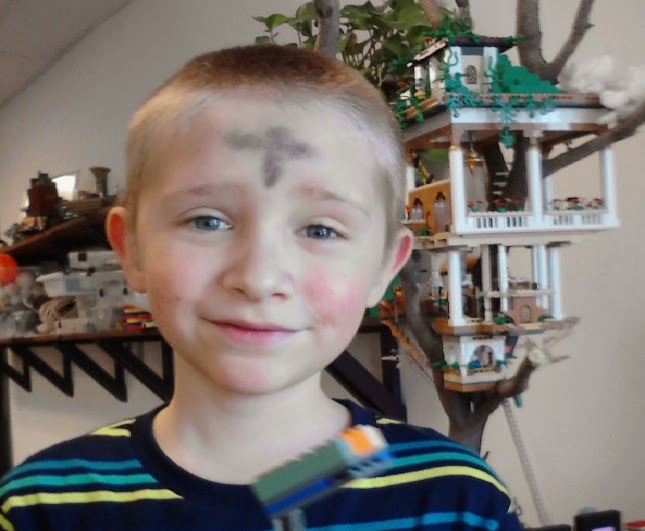 6. A reader asked- "What is the problem with Eastern Catholics 'borrowing' from the West? As a Latin-rite Catholic, I like to borrow some spiritual practices from the East...."
As you can see from the photo above, we also 'blend' our spiritual practices quite a bit, but we try to make our Byzantine rite the 'first stop' in our spiritual journey. Why? Well, I can already see my children being influenced by the majority culture in some ways. Let's take language. Their Romanian is not very good and neither is mine. Why? Well, we live in the United States. Most of the people we know are bi-lingual, so it is easier for them to speak in their accented English than for them to decipher our accented Romanian. Their father is working a lot and also in the habit of speaking English most of the time to them. Plus, English is just easier- at least when it comes to grammar.
I can see the same thing happening with the Byzantine rite. It is more difficult to be Byzantine than Roman-rite. An Akathist to Mary takes double the time that a rosary takes to pray. The culture-at-large knows little to nothing about Eastern Catholics, so we don't get even a little corporate nod like McDonald's fish-on-Fridays sale. We are much, much smaller, so it can just be next-to-impossible to find a Byzantine parish to attend! Or, if you have a parish less than an hour away, it will probably have only one Divine Liturgy on Sundays. You don't have the choice of the 6:30 AM or the 'last chance Mass' at 7 PM.
And then, there is our history. We are in a golden age of understanding between rites, I believe. This was not always the case. The Eastern rites' traditions were suppressed in the United States. So, we tend to get a little squirrely when someone suggests- just put your kid in the (Roman-rite) Catholic school! Just say a rosary! Bless us O Lord! Where's your scapular? Is that a Muslim prayer-thing on your wrist? It's Friday! Let's go out for fish sandwiches! Roman-rite spiritual practices are holy, just as Byzantine ones are, but there is only so much time in the day. If we take up Western practices, we probably will abandon our Eastern ones. 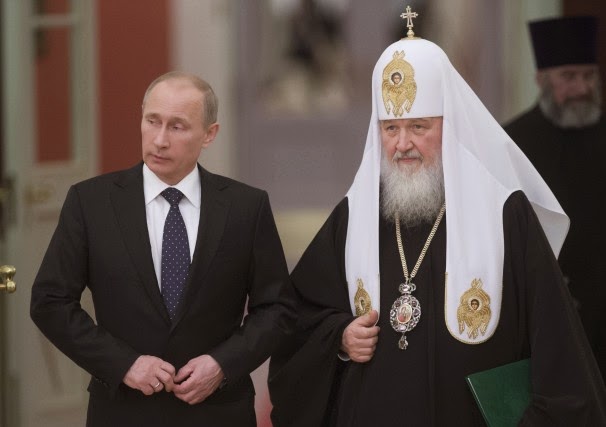 image: fox news
7. Did you know that Byzantine Catholic churches will be taken by the Russian state in Crimea (Ukraine)? They will be given to the state church.
more quick takes at conversion diary!
shared by priest's wife - S.T./ Anne Boyd at 11:14 PM