I was at the edge of my seat, first watching EWTN online and then listening to the radio while I was getting Boy from Kindergarten. Francis! 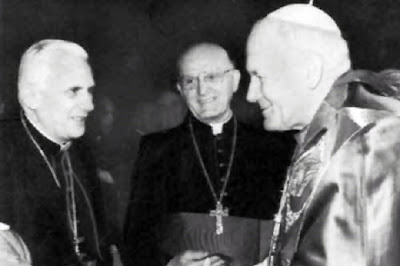 He's the third Pope I have known. Perhaps it is silly to feel anything personal for a man who lives across the ocean and leads more than a billion people. He certainly doesn't know me. But I suppose it is the human condition to be selfish and apply massive historical events to our own small lives.


I felt a kinship with John Paul II. He was already Pope for a long time before my family became Catholic when I was 12.  When he was in Los Angeles for World Youth Day, I was a part of the youth choir in Portland, Oregon. We did a satellite hook-up and I got to sing a solo for the Pope (a verse of Flow River, Flow- Fr Z would not be pleased). He was the perfect Pope for my youth. John Paul also lifted the indult against ordaining Eastern Catholic married men in the United States. We are here in the United States because of him.

John Paul and I were also 'together' in suffering. We lost our baby boy 20 weeks in utero less than a month before John Paul died. The morphine-aided labor with this baby was more painful than my previous two successful labors that had been drug-free. So, I named the baby John-Paul. That name hadn't been our plan if the baby had lived, but I felt that only Pope John Paul could understand my pain at that moment.

So, Benedict's election was ignored by me. I didn't watch any of the coverage. I didn't listen to any radio announcements. I didn't realize this until I was reflecting on the conclave that elected Francis. Slowly, I got to know Benedict through his writings and exciting developments such as the Anglican Ordinate, Summarum Ponticum, and the corrected English translation for the Roman rite. He is well-loved in this household and remembered in our prayers.

Even though we miss Benedict, I believe it is a beautiful thing that Francis has Benedict here on earth to pray for him and to perhaps advise him. And both Benedict and Francis choosing these names show a return  to a monastic sensibility- a spirituality that I believe is necessary when living a holy celibate life.
Many blessed years in health, happiness and holiness to both Benedict and Francis!
Blessed John Paul- pray for us!
(as usual- this post is not even 10% of the thoughts swirling in my head- maybe I will update...or at least edit...but I am a mom before blogger!)
shared by priest's wife at 11:17 AM